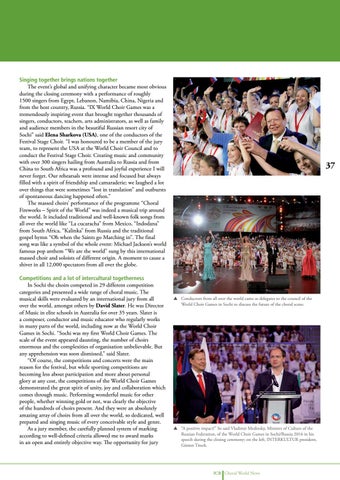 Singing together brings nations together The event’s global and unifying character became most obvious during the closing ceremony with a performance of roughly 1500 singers from Egypt, Lebanon, Namibia, China, Nigeria and from the host country, Russia. “IX World Choir Games was a tremendously inspiring event that brought together thousands of singers, conductors, teachers, arts administrators, as well as family and audience members in the beautiful Russian resort city of Sochi” said Elena Sharkova (USA), one of the conductors of the Festival Stage Choir. “I was honoured to be a member of the jury team, to represent the USA at the World Choir Council and to conduct the Festival Stage Choir. Creating music and community with over 300 singers hailing from Australia to Russia and from China to South Africa was a profound and joyful experience I will never forget. Our rehearsals were intense and focused but always filled with a spirit of friendship and camaraderie; we laughed a lot over things that were sometimes “lost in translation” and outbursts of spontaneous dancing happened often.” The massed choirs’ performance of the programme “Choral Fireworks – Spirit of the World” was indeed a musical trip around the world. It included traditional and well-known folk songs from all over the world like “La cucaracha” from Mexico, “Indodana” from South Africa, “Kalinka” from Russia and the traditional gospel hymn “Oh when the Saints go Marching in”. The final song was like a symbol of the whole event: Michael Jackson’s world famous pop anthem “We are the world” sung by this international massed choir and soloists of different origin. A moment to cause a shiver in all 12,000 spectators from all over the globe. Competitions and a lot of intercultural togetherness In Sochi the choirs competed in 29 different competition categories and presented a wide range of choral music. The musical skills were evaluated by an international jury from all over the world, amongst others by David Slater. He was Director of Music in elite schools in Australia for over 35 years. Slater is a composer, conductor and music educator who regularly works in many parts of the world, including now at the World Choir Games in Sochi. “Sochi was my first World Choir Games. The scale of the event appeared daunting, the number of choirs enormous and the complexities of organisation unbelievable. But any apprehension was soon dismissed,” said Slater. “Of course, the competitions and concerts were the main reason for the festival, but while sporting competitions are becoming less about participation and more about personal glory at any cost, the competitions of the World Choir Games demonstrated the great spirit of unity, joy and collaboration which comes through music. Performing wonderful music for other people, whether winning gold or not, was clearly the objective of the hundreds of choirs present. And they were an absolutely amazing array of choirs from all over the world, so dedicated, well prepared and singing music of every conceivable style and genre. As a jury member, the carefully planned system of marking according to well-defined criteria allowed me to award marks in an open and entirely objective way. The opportunity for jury

 Conductors from all over the world came as delegates to the council of the World Choir Games in Sochi to discuss the future of the choral scene.

 “A positive impact!” So said Vladimir Medinsky, Minister of Culture of the Russian Federation, of the World Choir Games in Sochi/Russia 2016 in his speech during the closing ceremony; on the left, INTERKULTUR president, Günter Titsch. 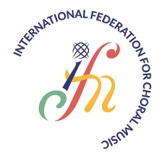