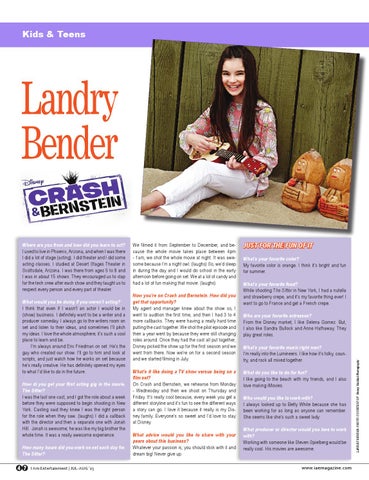 What would you be doing if you weren’t acting? I think that even if I wasn’t an actor I would be in (show) business. I definitely want to be a writer and a producer someday. I always go to the writers room on set and listen to their ideas, and sometimes I’ll pitch my ideas. I love the whole atmosphere; it’s such a cool place to learn and be. I’m always around Eric Friedman on set. He’s the guy who created our show. I’ll go to him and look at scripts, and just watch how he works on set because he’s really creative. He has definitely opened my eyes to what I’d like to do in the future. How di you get your first acting gig in the movie, The Sitter? I was the last one cast, and I got the role about a week before they were supposed to begin shooting in New York. Casting said they knew I was the right person for the role when they saw. (laughs) I did a callback with the director and then a separate one with Jonah Hill. Jonah is awesome; he was like my big brother the whole time. It was a really awesome experience. How many hours did you work on set each day for, The Sitter?

We filmed it from September to December, and because the whole movie takes place between 4pm - 1am, we shot the whole movie at night. It was awesome because I’m a night owl. (laughs) So, we’d sleep in during the day and I would do school in the early afternoon before going on set. We at a lot of candy and had a lot of fun making that movie. (laughs) Now you’re on Crash and Bernstein. How did you get that opportunity? My agent and manager knew about the show so, I went to audition the first time, and then I had 3 to 4 more callbacks. They were having a really hard time putting the cast together. We shot the pilot episode and then a year went by because they were still changing roles around. Once they had the cast all put together, Disney picked the show up for the first season and we went from there. Now we’re on for a second season and we started filming in July. What’s it like doing a TV show versus being on a film set? On Crash and Bernstein, we rehearse from Monday - Wednesday and then we shoot on Thursday and Friday. It’s really cool because, every week you get a different storyline and it’s fun to see the different ways a story can go. I love it because it really is my Disney family. Everyone’s so sweet and I’d love to stay at Disney. What advice would you like to share with your peers about this business? Whatever your passion is, you should stick with it and dream big! Never give up.

JUST FOR THE FUN OF IT What’s your favorite color? My favorite color is orange. I think it’s bright and fun for summer. What’s your favorite food? While shooting The Sitter in New York, I had a nutella and strawberry crepe, and it’s my favorite thing ever! I want to go to France and get a French crepe. Who are your favorite actresses? From the Disney market, I like Selena Gomez. But, I also like Sandra Bullock and Anne Hathaway. They play great roles. What’s your favorite music right now? I’m really into the Lumineers. I like how it’s folky, country, and rock all mixed together. What do you like to do for fun? I like going to the beach with my friends, and I also love making iMovies. Who would you like to work with? I always looked up to Betty White because she has been working for as long as anyone can remember. She seems like she’s such a sweet lady. What producer or director would you love to work with? Working with someone like Steven Spielberg would be really cool. His movies are awesome. www.iaemagazine.com

Where are you from and how did you learn to act? I used to live in Phoenix, Arizona, and when I was there I did a lot of stage (acting). I did theater and I did some acting classes. I studied at Desert Stages Theater in Scottsdale, Arizona. I was there from ages 5 to 9 and I was in about 15 shows. They encouraged us to clap for the tech crew after each show and they taught us to respect every person and every part of theater. 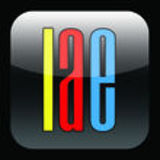 I Am Entertainment® Media LLC