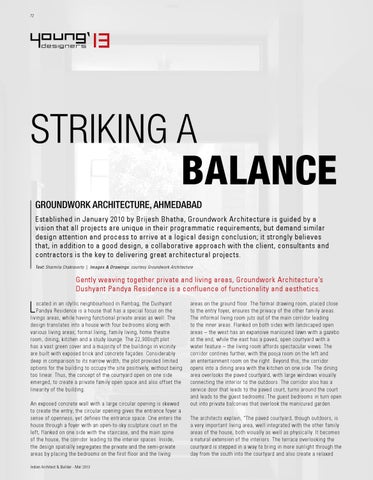 STRIKING A BALANCE GROUNDWORK ARCHITECTURE, AHMEDABAD Established in January 2010 by Brijesh Bhatha, Groundwork Architecture is guided by a vision that all projects are unique in their programmatic requirements, but demand similar design attention and process to arrive at a logical design conclusion; it strongly believes that, in addition to a good design, a collaborative approach with the client, consultants and contractors is the key to delivering great architectural projects. Text: Sharmila Chakravorty | Images & Drawings: courtesy Groundwork Architecture

Gently weaving together private and living areas, Groundwork Architecture’s Dushyant Pandya Residence is a confluence of functionality and aesthetics.

ocated in an idyllic neighbourhood in Rambag, the Dushyant Pandya Residence is a house that has a special focus on the livings areas, while having functional private areas as well. The design translates into a house with four bedrooms along with various living areas; formal living, family living, home theatre room, dining, kitchen and a study lounge. The 22,900sqft plot has a vast green cover and a majority of the buildings in vicinity are built with exposed brick and concrete façades. Considerably deep in comparison to its narrow width, the plot provided limited options for the building to occupy the site positively, without being too linear. Thus, the concept of the courtyard open on one side emerged, to create a private family open space and also offset the linearity of the building. An exposed concrete wall with a large circular opening is skewed to create the entry; the circular opening gives the entrance foyer a sense of openness, yet defines the entrance space. One enters the house through a foyer with an open-to-sky sculpture court on the left, flanked on one side with the staircase, and the main spine of the house, the corridor leading to the interior spaces. Inside, the design spatially segregates the private and the semi-private areas by placing the bedrooms on the first floor and the living Indian Architect & Builder - Mar 2013

areas on the ground floor. The formal drawing room, placed close to the entry foyer, ensures the privacy of the other family areas. The informal living room juts out of the main corridor leading to the inner areas. Flanked on both sides with landscaped open areas – the west has an expansive manicured lawn with a gazebo at the end, while the east has a paved, open courtyard with a water feature – the living room affords spectacular views. The corridor contines further, with the pooja room on the left and an entertainment room on the right. Beyond this, the corridor opens into a dining area with the kitchen on one side. The dining area overlooks the paved courtyard, with large windows visually connecting the interior to the outdoors. The corridor also has a service door that leads to the paved court, turns around the court and leads to the guest bedrooms. The guest bedrooms in turn open out into private balconies that overlook the manicured garden. The architects explain, “The paved courtyard, though outdoors, is a very important living area, well integrated with the other family areas of the house, both visually as well as physically. It becomes a natural extension of the interiors. The terrace overlooking the courtyard is stepped in a way to bring in more sunlight through the day from the south into the courtyard and also create a relaxed 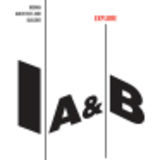