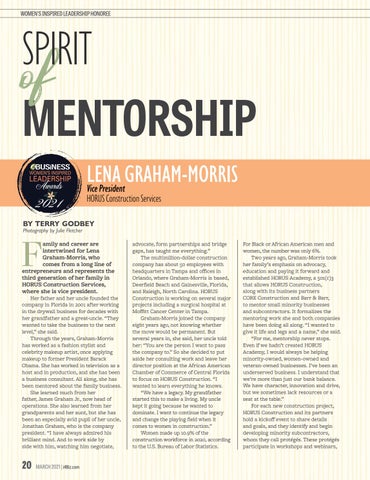 amily and career are intertwined for Lena Graham-Morris, who comes from a long line of entrepreneurs and represents the third generation of her family in HORUS Construction Services, where she is vice president.

Her father and her uncle founded the company in Florida in 2001 after working in the drywall business for decades with her grandfather and a great-uncle. “They wanted to take the business to the next level,” she said. Through the years, Graham-Morris has worked as a fashion stylist and celebrity makeup artist, once applying makeup to former President Barack Obama. She has worked in television as a host and in production, and she has been a business consultant. All along, she has been mentored about the family business. She learned much from her father, James Graham Jr., now head of operations. She also learned from her grandparents and her aunt, but she has been an especially avid pupil of her uncle, Jonathan Graham, who is the company president. “I have always admired his brilliant mind. And to work side by side with him, watching him negotiate,

advocate, form partnerships and bridge gaps, has taught me everything.” The multimillion-dollar construction company has about 50 employees with headquarters in Tampa and offices in Orlando, where Graham-Morris is based, Deerfield Beach and Gainesville, Florida, and Raleigh, North Carolina. HORUS Construction is working on several major projects including a surgical hospital at Moffitt Cancer Center in Tampa. Graham-Morris joined the company eight years ago, not knowing whether the move would be permanent. But several years in, she said, her uncle told her: “You are the person I want to pass the company to.” So she decided to put aside her consulting work and leave her director position at the African American Chamber of Commerce of Central Florida to focus on HORUS Construction. “I wanted to learn everything he knows. “We have a legacy. My grandfather started this to make a living. My uncle kept it going because he wanted to dominate. I want to continue the legacy and change the playing field when it comes to women in construction.” Women made up 10.9% of the construction workforce in 2020, according to the U.S. Bureau of Labor Statistics.

For Black or African American men and women, the number was only 6%. Two years ago, Graham-Morris took her family’s emphasis on advocacy, education and paying it forward and established HORUS Academy, a 501(c)3 that allows HORUS Construction, along with its business partners CORE Construction and Barr &amp; Barr, to mentor small minority businesses and subcontractors. It formalizes the mentoring work she and both companies have been doing all along. “I wanted to give it life and legs and a name,” she said. “For me, mentorship never stops. Even if we hadn’t created HORUS Academy, I would always be helping minority-owned, women-owned and veteran-owned businesses. I’ve been an underserved business. I understand that we’re more than just our bank balance. We have character, innovation and drive, but we sometimes lack resources or a seat at the table.” For each new construction project, HORUS Construction and its partners hold a kickoff event to share details and goals, and they identify and begin developing minority subcontractors, whom they call protégés. These protégés participate in workshops and webinars,

i4 Business inspires, educates and promotes entrepreneurship in the Central Florida region. The March edition features incredible leaders and there is much we can learn from these exceptional women. Each month we introduce you to the most successful and innovative entrepreneurs and business leaders in the region. Their stories are inspirational and the impact they make in our community and beyond is ongoing. 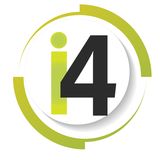 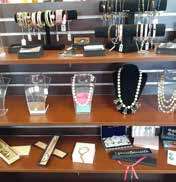