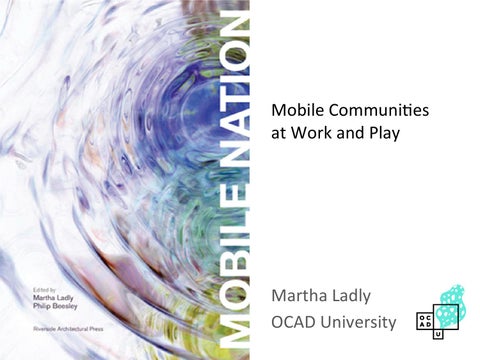 Narra$on in Hybrid Mobile Environments “Every individual life can eventually be told as a story with a beginning, and end. This is the prepoli,cal and prehistorical condi,on of history. Narra,ve reveals meaning in one’s life, which would otherwise be perceived as merely an intolerable sequence of events.” Hannah Arendt, in Isak Dinesen 1885‐1962 (2001) on the life of author Karen Blixen

Narra,on oﬀers both the the narrator and the existant a quest that is “always an education, both into the character of events and participants, and in self-knowledge”. Alasdair MacIntyre (1981)

“The self desires and is open to the tale of a life story that unfolds in his or her life,me in a way that uniquely reveals who that person is. The plural and interac,ve space of exhibi,on—the scene of narra,on— in which we tell each other our stories, suggests a poli,cal‐rela,onal interac,on that is aWen,ve to who rather than what we are.” Adriana Cavarero (2005)

This was the loca,on of the ﬁrst Transcultural Mapping Workshops, which were also the site of the former Soviet RT:32 Radio Telescope, home of the Acous,c Space Lab. hWp://acous,c.space.re‐lab.net/

At the workshops, Karlis Kalnins provides the term loca,ve media as a test‐category for processes that annotate physical space, by combining mobile data and mobile compu,ng with GPS.

2003: [murmur] starts an urban community narra,ve mobile movement oﬀering an evoca,ve portrait of the past and current life of the city, to its residents, and visitors. hWp://murmurtoronto.ca/

message aggregation, and illustrated ways in which cultural in SMS use have been manifested in games in Berlin ore. Theory created Day of the Figurines with collaborators in the Project for Pervasive Gaming, a three-year research project he European Union.

In 2007, Rider Spoke, a mobile game for urban cyclists combining narra,ve, reportage and theatre with cycling and mobile game play, is deployed by the Bri,sh mobile art collec,ve, Blast Theory. In 2008 they follow up with Day of the Figurines, a strategic urban community building and inter‐rela,onal narra,ve ‘serious’ game. hWp://www.blasWheory.co.uk/

You Get Me (2008), is a documentary narra,ve game, developed by Blast Theory played between par,cipants in Mile End Park and the Royal Opera House, Covent Garden, London.

Cherry Blossoms: Using mobile media to recreate an empathe,c experience of the wrenching surprise of urban bombing in Iraq during war,me.

Each piece of confeo is inscribed with the name of a civilian who died in the war, and the circumstances of their death.

GAMEFIT Take Me with You:

A mobile ﬁtness and storytelling narra,ve game for grandparents &amp; grandchildren Mo4va4on Encouraging posi,ve, lifelong habits plays a key part in staying ﬁt and engaged in life. Regular walking can be a protec,ve factor against countless diseases including diabetes, Alzheimer s, anxiety, and depression. Shared ac,vi,es with family can provide valuable inspira,on for those who are not otherwise inclined to exercise and/or tend to self‐isolate. This project explores mobile ﬁtness games designed speciﬁcally to enable seniors and children to play together (or with others), with their par,cular needs in mind. The shared adventure game Take Me with You is intended to encourage physical ac,vity, cogni,ve s,mula,on, and social engagement, by using these elements to move the narra,ve of the game forward.