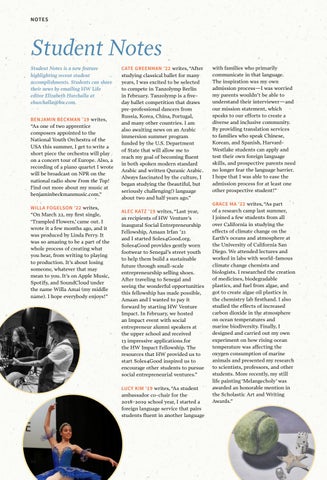 Student Notes Student Notes is a new feature highlighting recent student accomplishments. Students can share their news by emailing HW Life editor Elizabeth Hurchalla at ehurchalla@hw.com. BENJAMIN BECKMAN ’19 writes, “As one of two apprentice composers appointed to the National Youth Orchestra of the USA this summer, I get to write a short piece the orchestra will play on a concert tour of Europe. Also, a recording of a piano quartet I wrote will be broadcast on NPR on the national radio show From the Top! Find out more about my music at benjaminbeckmanmusic.com.” WILLA FOGELSON ’22 writes, “On March 22, my first single, ‘Trampled Flowers,’ came out. I wrote it a few months ago, and it was produced by Linda Perry. It was so amazing to be a part of the whole process of creating what you hear, from writing to playing to production. It’s about losing someone, whatever that may mean to you. It’s on Apple Music, Spotify, and SoundCloud under the name Willa Amai (my middle name). I hope everybody enjoys!”

CATE GREENMAN ’22 writes, “After studying classical ballet for many years, I was excited to be selected to compete in Tanzolymp Berlin in February. Tanzolymp is a fiveday ballet competition that draws pre-professional dancers from Russia, Korea, China, Portugal, and many other countries. I am also awaiting news on an Arabic immersion summer program funded by the U.S. Department of State that will allow me to reach my goal of becoming fluent in both spoken modern standard Arabic and written Quranic Arabic. Always fascinated by the culture, I began studying the (beautiful, but seriously challenging!) language about two and half years ago.” ALEC KATZ ’19 writes, “Last year, as recipients of HW Venture’s inaugural Social Entrepreneurship Fellowship, Amaan Irfan ’21 and I started Soles4Good.org. Soles4Good provides gently worn footwear to Senegal’s street youth to help them build a sustainable future through small-scale entrepreneurship selling shoes. After traveling to Senegal and seeing the wonderful opportunities this fellowship has made possible, Amaan and I wanted to pay it forward by starting HW Venture Impact. In February, we hosted an Impact event with social entrepreneur alumni speakers at the upper school and received 13 impressive applications for the HW Impact Fellowship. The resources that HW provided us to start Soles4Good inspired us to encourage other students to pursue social entrepreneurial ventures.” LUCY KIM ’19 writes, “As student ambassador co-chair for the 2018-2019 school year, I started a foreign language service that pairs students fluent in another language

with families who primarily communicate in that language. The inspiration was my own admission process—I was worried my parents wouldn’t be able to understand their interviewer—and our mission statement, which speaks to our efforts to create a diverse and inclusive community. By providing translation services to families who speak Chinese, Korean, and Spanish, HarvardWestlake students can apply and test their own foreign language skills, and prospective parents need no longer fear the language barrier. I hope that I was able to ease the admission process for at least one other prospective student!” GRACE MA ’22 writes, “As part of a research camp last summer, I joined a few students from all over California in studying the effects of climate change on the Earth’s oceans and atmosphere at the University of California San Diego. We attended lectures and worked in labs with world-famous climate change chemists and biologists. I researched the creation of medicines, biodegradable plastics, and fuel from algae, and got to create algae oil plastics in the chemistry lab firsthand. I also studied the effects of increased carbon dioxide in the atmosphere on ocean temperatures and marine biodiversity. Finally, I designed and carried out my own experiment on how rising ocean temperature was affecting the oxygen consumption of marine animals and presented my research to scientists, professors, and other students. More recently, my still life painting ‘Melangecholy’ was awarded an honorable mention in the Scholastic Art and Writing Awards.” 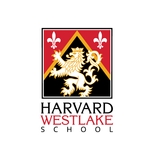