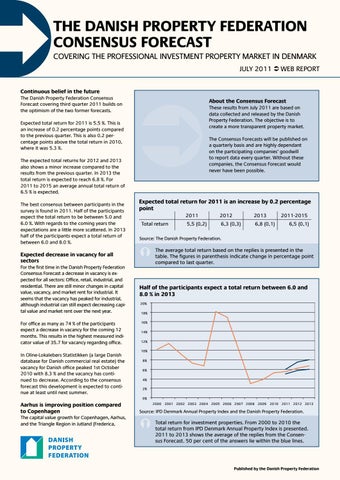 Continuous belief in the future The Danish Property Federation Consensus Forecast covering third quarter 2011 builds on the optimism of the two former forecasts.

About the Consensus Forecast These results from July 2011 are based on data collected and released by the Danish Property Federation. The objective is to create a more transparent property market.

Expected total return for 2011 is an increase by 0.2 percentage point

Expected decrease in vacancy for all sectors For the first time in the Danish Property Federation Consensus Forecast a decrease in vacancy is expected for all sectors: Office, retail, industrial, and residential. There are still minor changes in capital value, vacancy, and market rent for industrial. It seems that the vacancy has peaked for industrial, although industrial can still expect decreasing capital value and market rent over the next year.

For office as many as 74 % of the participants expect a decrease in vacancy for the coming 12 months. This results in the highest measured indicator value of 35.7 for vacancy regarding office.

In Oline-Lokalebørs Statistikken (a large Danish database for Danish commercial real estate) the vacancy for Danish office peaked 1st October 2010 with 8.3 % and the vacancy has continued to decrease. According to the consensus forecast this development is expected to continue at least until next summer.

The capital value growth for Copenhagen, Aarhus, and the Triangle Region in Jutland (Frederica,

Kolding, and Vejle) is still expected to be more positive than for the rest of the country. 95 % of the participants anticipate that the capital value growth will be less favourable in the rest of the country. Compared to the last two quarters, Aarhus has steadily cemented the position as second best in Denmark with regards to expected capital value growth. In this quarter, 19 % even expect that the capital values will develop more positive in Aarhus than in Copenhagen.

The participants have answered: ‘very low’, ‘lower’, ‘unchanged’, ‘hig her’, ‘much higher’. The answers are given a value in order to obtain an indicator between -100 and 100. An indicator of 100 means that everybody has answered ‘much higher’, and -100 shows that everybody has answered ‘very low’. An indicator of 0 indicates unchanged expectations. For example an indicator of 19.0 per cent is achieved by 19.0 per cent of the participants answering ‘much higher’ with the remaining answers ‘unchanged’. The figures in parenthesis indicate change in indication point compared to last quarter.

Capital value growth is expected to continue in Copenhagen

42 market players participated in this survey. 50 % of the participants are property owners, 21 % are banks/mortgage providers, 14 % are commercial agents, and 14 % are other players.

Below please find some of the companies, which have contributed

The map shows which regions in Denmark have the highest capital value growth compared to other regions. We have asked about Copenhagen, Aarhus, the Triangle Region in Jutland (Frederica, Kolding, and Vejle), and all other regions as one region. From the replies, we have created an indicator. If an area is light green, at least 70 % of the participants have agreed that this region is doing best compared to other regions.

Continuous belief in the future