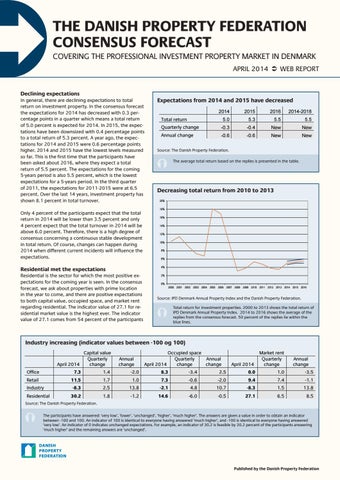 Only 4 percent of the participants expect that the total return in 2014 will be lower than 3.5 percent and only 4 percent expect that the total turnover in 2014 will be above 6.0 percent. Therefore, there is a high degree of consensus concerning a continuous stable development in total return. Of course, changes can happen during 2014 when different current incidents will influence the expectations.

Residential is the sector for which the most positive expectations for the coming year is seen. In the consensus forecast, we ask about properties with prime location in the year to come, and there are positive expectations to both capital value, occupied space, and market rent regarding residential. The indicator value of 27.1 for residential market value is the highest ever. The indicator value of 27.1 comes from 54 percent of the participants

expecting an increased market rent for residential, while the rest has a neutral expectation to market rent the coming year. In figures from IPD Danish Property Index, residential is also the only sector, which generally has a growth in value and a decrease in occupied space, while residential as a total also has a positive market rent growth. Industry is also continuing the positive development this quarter. In the figures from 2013, industry showed a general growth in value of -3.3 percent. A continuous fall in capital value is expected for 2014. Industry is also the sector that has the most positive annual change in the consensus forecast. Office and retail have small positive expectations on capital value and market rent, while the expectations for occupied space have decreased a bit since last quarter.

The regional map covering the expectations for capital value is still characterized by an expectation of increased centralization in the future. If you look at the results from 2013 they showed a general value growth on investment property of -1.2 percent and on office -1.4 percent. However, there are positive figures for office in Copenhagen, Aarhus and the Triangle Region. The differences between the cities are not significant in 2013. Office in Copenhagen has a general growth in value of 1.0 percent, the Triangle Region a growth of 0.9 percent, and Aarhus a growth of 0.4 percent. The consensus forecast still expects the best development in Copenhagen, a head of Aarhus and the Triangle Region, followed by the rest of the country.

Expectations for 2013 were too high Recent figures from IPD Danish Property Index show that since 2010, the total return for investment property has declined and in 2013 it was 3.5 percent. In the latest consensus forecast the expectations for 2013 ended at 5.0 percent. The expectations were 1.5 percentage points higher than the final figures, which were 3.5 percent. It is the third time in a row that the consensus forecast shows higher figures compared to actual, while in 2010 the expectations were lower than actual. This shows that there is a belief in a better economy and total return in the future, but the years 2011-2013 ended up by being years with low growth and low total return on properties in general.

Positive growth in value for Office in Copenhagen, Aarhus, and the Triangle Region

48 market players participated in this forecast. 42 percent of the participants are property owners. Furthermore, 27 percent are commercial brokers, 10 percent are banks/mortgage providers, and 21 percent are other players.