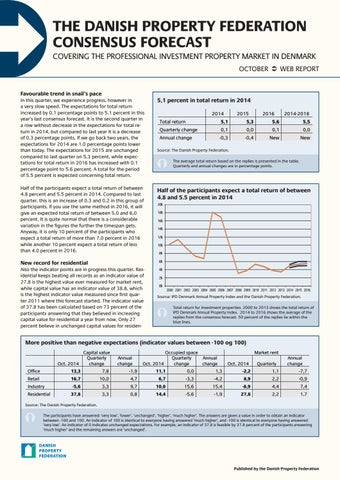 tial. Only minor drawback for residential was that the expectation for occupied space was decreasing compared to last quarter, however still positive.

Industry also experienced progress, and there is even a slight positive expectation that occupied space will increase. Capital value for industry is still negative with an indicator value of -5.6, but -5.6 is the highest ever measured. Although the consensus forecast only deals with properties of prime locations, it is positive to see that industry is on its way up. Capital value for office and retail also had a small upward revision. Retail’s indicator value of 16.7 for capital value has only been higher, if we go back to second quarter 2011. For both office and retail, a small progress on occupied space is expected while market rent is almost neutral.

Expectations of financial growth The economic growth in Denmark in second quarter was disappointing and this might influence the results for investment properties in the long run. So far, the government has maintained the expectations for economic growth at 1.4 percent for 2014, but this might be too high. It is crucial for the activity within properties that Danish economy is in progress. The economic growth must contribute to decrease in occupied space and stability in market rent in order to obtain a sound development in capital values. In the most recent analysis of Danish Economy, the economic advisers downgrade the estimates of GNP-growth in 2014 significantly. However, they still have a positive view on the development in employment. The expectation of GNPgrowth in 2014 have been downgraded to 0.5 percent in the advisers’ fall report. In spring the estimate to growth was 1.5 percent.

Relative increase in Odense and the Triangle Area

The map shows which regions in Denmark that have the highest value growth compared to other regions. We have asked about the Triangle Region in Jutland (Fredericia, Kolding, and Vejle), Copenhagen, Odense, Aalborg, Aarhus, and all other regions as the rest of the country. From the replies, we have created an indicator. If the area is the lightest colour, at least 70 percent of the participants have agreed that this region is doing best compared to other regions.

45 market players participated in this forecast. 38 percent of the participants are property owners. Furthermore, 27 percent are commercial brokers, 13 percent are banks/mortgage providers, and 22 percent are other players.