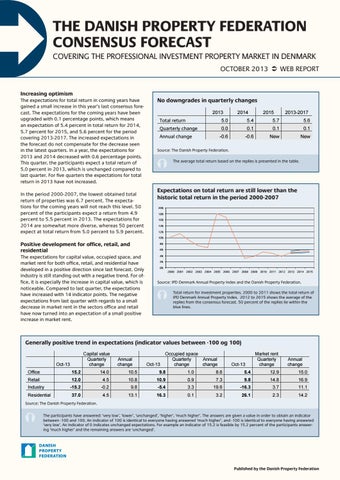 No downgrades in quarterly changes 2013

Capital value has the best development in Copenhagen

Almost all participants in the forecast (96 percent) are of the opinion that capital value will increase more in Copenhagen than in Aarhus, the Triangle Region in Jutland and the rest of the country. Compared to last quarter the Triangle Region in Jutland has lost a little when compared to Copenhagen, Aarhus, and the rest of the country. The major part of the participants gives input each and every quarter.

46 market players participated in this forecast. 48 percent of the participants are property owners. Furthermore, 24 percent are commercial brokers, 9 percent are banks/mortgage providers, and 20 percent are other players.