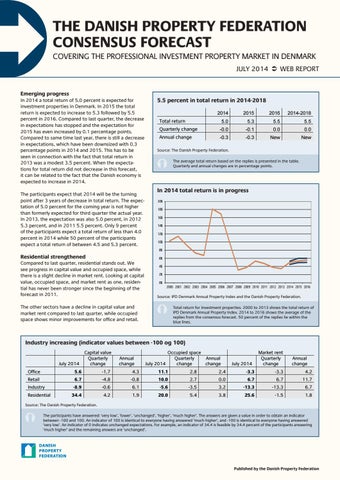 The other sectors have a decline in capital value and market rent compared to last quarter, while occupied space shows minor improvements for office and retail.

Better development in capital values in the centres

Compared to same time last year, there is progress for industry; however, the last many quarters’ exclusively positive development for industry is set on hold in this quarter’s consensus forecast.

Odense and Aalborg are in

The regional analysis of development in capital value has been extended with Odense and Aalborg in this web report. Both Odense and Aalborg follow the trend from the other regional centres by being above the expected development for the rest of the country. Thereby, the general expectation is still that the best development in capital value in 2014 will be in the centres. Among the centres, we find the most positive expectations for Copenhagen followed by Aarhus. On third place, we find Aalborg closely followed by the Triangle Region, and Odense as the fifth center. All in all 96 of the participant believe that the capital values in Odense develops better than the rest of the country.

The map shows which regions in Denmark that have the highest value growth compared to other regions. We have asked about the Triangle Region in Jutland (Fredericia, Kolding, and Vejle), Copenhagen, Odense, Aalborg, Aarhus, and all other regions as the rest of the country. From the replies, we have created an indicator. If the area is the lightest colour, at least 50 percent of the participants have agreed that this region is doing best compared to other regions.

45 market players participated in this forecast. 42 percent of the participants are property owners. Furthermore, 29 percent are commercial brokers, 11 percent are banks/mortgage providers, and 18 percent are other players.