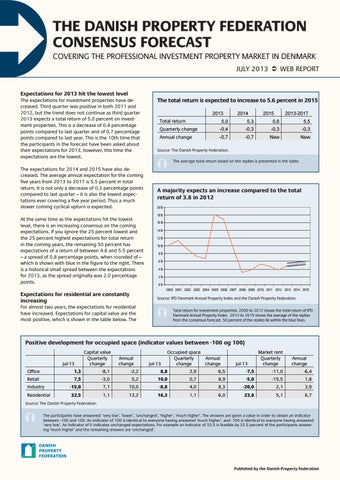 The expectations for investment properties have decreased. Third quarter was positive in both 2011 and 2012, but the trend does not continue as third quarter 2013 expects a total return of 5.0 percent on investment properties. This is a decrease of 0.4 percentage points compared to last quarter and of 0.7 percentage points compared to last year. This is the 10th time that the participants in the forecast have been asked about their expectations for 2013, however, this time the expectations are the lowest.

Expectations for residential are constantly increasing

For almost two years, the expectations for residential have increased. Expectations for capital value are the most positive, which is shown in the table below. The

indicator value of 32.5 is the highest measured on residential capital value and it is the second highest indicator value ever measured on all sectors within capital value, occupied space, and market rent. Two thirds of the participants expect increased capital value on residential with prime location in a year compared with today. Both office, retail, industry, and residential experience smaller increases in expectations for the occupied space. The expectations to the occupied space is at its highest on all four sectors since third quarter 2011.Conversely, there is a decrease in the expectation for market rent on office and retail. 21 percent of the participants believe that the market rent on office with prime location will decrease a year from now.

Also lower economic growth in 2013 Unfortunately, we see a trend that the expectations of growth for the Danish economy have to be downgraded. This also applies for the economic advisers, who, in May, downgraded the growth expectations for 2013 from 1.6 percent to only 0.2 percent. Compared to the period from 1997 to 2007, where the Danish economy experienced an average economic growth of 1.9 percent, the present economic situation is not satisfactory. In general, it has been expected that the economy would quickly move towards a boom after the economic crisis, but from 2010 to 2012 the economic growth rates have only been 1.6, 1.1, and -0.5 percent. When the property industry downgrade the expectations to the investment property market over the coming years compared to last quarter, it is linked to the low economic growth. If the economic advisers’ forecast with growth rates of 1.8 and 1.9 percent for 2014 and 2015 hopefully fulfils, it will mean higher activity on the property market again.

Still no trust in capital value for the rest of Denmark

40 market players participated in this forecast. 40 percent of the participants are property owners. Furthermore, 33 percent are commercial brokers, 10 percent are banks/mortgage providers, and 18 percent are other players.