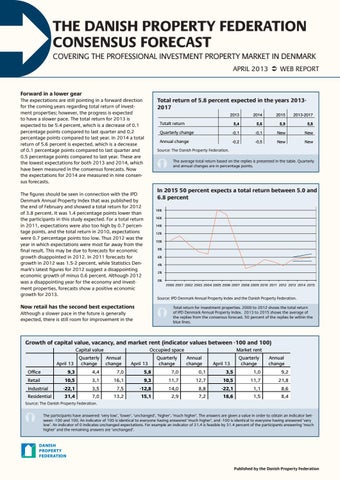 Forward in a lower gear

The figures should be seen in connection with the IPD Denmark Annual Property Index that was published by the end of February and showed a total return for 2012 of 3.8 percent. It was 1.4 percentage points lower than the participants in this study expected. For a total return in 2011, expectations were also too high by 0.7 percentage points, and the total return in 2010, expectations were 0.7 percentage points too low. Thus 2012 was the year in which expectations were most far away from the final result. This may be due to forecasts for economic growth disappointed in 2012. In 2011 forecasts for growth in 2012 was 1.5-2 percent, while Statistics Denmark’s latest figures for 2012 suggest a disappointing economic growth of minus 0.6 percent. Although 2012 was a disappointing year for the economy and investment properties, forecasts show a positive economic growth for 2013.

Now retail has the second best expectations Although a slower pace in the future is generally expected, there is still room for improvement in the

outlook a year from now on the four property sectors, office, retail, industrial, and residential. Both in relation to the last quarter and compared to last year there are increases. For industry a decreasing capital value is expected, increasing vacancy and decreasing market rents, while the opposite applies to residential, which has the highest expectations. For industry it is especially a small negative expectation to vacancy which applies. Not since the third quarter of 2011, there has been a positive expectation for vacancy for industrial. For residential a more positive indicator value has not been measured as in this quarter with 31.4.

Both retail and office shows small positive indicator values. Up to 30 percent of the participants indicated positive expectations for retail. The first consensus forecast was issued on 26 January 2011 and the consensus forecast of the second quarter of 2013 is the first in which retail has a better indicator than office for capital value, vacancy, and market rent. This is the first time that retail is a better sector than office. Compared to last quarter, it is especially vacancy and market rent, which has increased for retail.

The map shows which regions in Denmark that have the highest value growth compared to other regions. We have asked about Copenhagen, Aarhus, the Triangle Region in Jutland (Fredericia, Kolding, and Vejle), and all other regions as one region. From the replies, we have created an indicator. If the area is light green, at least 70 percent of the participants have agreed that this region is doing best compared to other regions.

Correct expectations for sectors in 2012 In this consensus forecast, expectations for 2012 were that residential would have the most positive development, while industrial would have the worst development. This is consistent with the figures from IPD Denmark Annual Property Index 2012 which showed that residential had the highest total return of 6.7 percent of the four sectors, and residential had a capital growth of 3.0 percent in 2012. Industrial gave a total return of 0.9 percent and had a capital growth of minus 5.7 percent. In 2012 retail and office had respectively 4.8 and 3.0 percent in total return and capital growth were respectively 0.2 and minus 1.8 percent, according to IPD Denmark Annual Property Index.

43 market players participated in this forecast. 47 percent of the participants are property owners, 23 percent commercial brokers, 12 percent are banks/ mortgage providers, and 19 percent are other players.

Forward in a lower gear