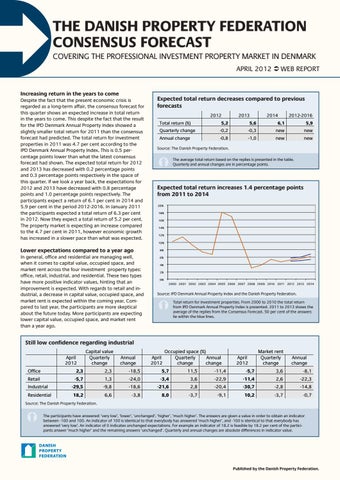 Increasing return in the years to come

Lower expectations compared to a year ago

Lower expectations for both economy and property There is significant difference between the four property sectors: office, retail, industrial, and residential. The overall tendency is that the expectations for investment properties have decreased during the last year.

The same overall picture can be found in figures from Statistics Denmark. They publish a monthly indicator showing local expectations for the Danish economy in general.

The map shows which regions in Denmark that have the highest capital value growth compared to other regions. We have asked about Copenhagen, Aarhus, the Triangle Region in Jutland (Frederica, Kolding, and Vejle), and all other regions as one region. From the replies, we have created an indicator. If an area is light green, at least 70 per cent of the participants have agreed that this region is doing best compared to other regions.

Increasing return in the years to come