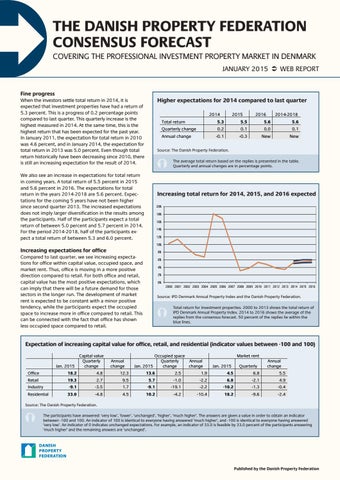 Expectation of increasing capital value for office, retail, and residential (indicator values between -100 and 100)

Both residential and industry came out with a little weaker expectations than the previous quarter. However, this does not change that residential by far is the sector with most positive expectations. On the other hand, expectations for industry are not likely to move to the positive side. Still, the conclusion is that capital value for residential is expected to increase, while industry shows the opposite, a further decrease.

Compared to the other Nordic capitals, the development in market rent for office in Copenhagen will be constant over the coming years. This is shown in a forecast from IPF (Investment Property Forum). It is expected that the market rent for office in Copenhagen will increase by 1.1 percent per year during the period from 2014 to 2016. In the same period, the economic advisers expect an inflation of 1.2 percent. During the same period, market rent in office is expected to increase by 1.6 percent in Helsinki, while it is 2.7 percent in Stockholm, and 3.3 percent in Oslo. With a constant development in market rent for office, it will still be possible to get a turnover if the occupied space percentage continues to grow. This will mean improved cash flow to the property owners.

Odense is slowly gaining Compared to last quarter, Odense is the area that moves forward the most, when the participants evaluate where the capital value will develop most positively. However, only minor changes have occurred. Expectations are still most positive about Copenhagen followed by Aarhus, the Triangle Region in Jutland, Aalborg, and Odense. Finally, the participants still agree that the rest of the country has the lowest expectations in capital value. Over 90 percent of the participants rate capital value lowest for the rest of the country, while more than 90 percent rates Copenhagen highest.

The map shows which regions in Denmark that have the highest value growth compared to other regions. We have asked about the Triangle Region in Jutland (Fredericia, Kolding, and Vejle), Copenhagen, Odense, Aalborg, Aarhus, and all other regions as the rest of the country. From the replies, we have created an indicator. If the area is the lightest colour, at least 70 percent of the participants have agreed that this region is doing best compared to other regions.

44 market players participated in this forecast. 32 percent of the participants are property owners. Furthermore, 27 percent are commercial brokers, 9 percent are banks/mortgage providers, and 32 percent are other players.