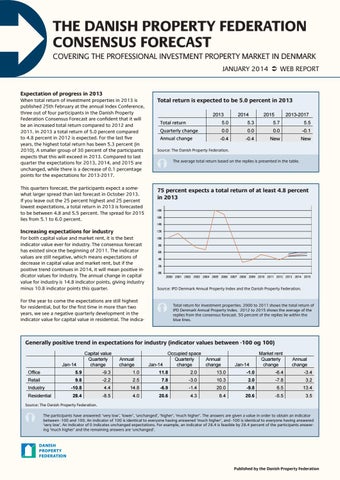 Expectation of progress in 2013

This quarters forecast, the participants expect a somewhat larger spread than last forecast in October 2013. If you leave out the 25 percent highest and 25 percent lowest expectations, a total return in 2013 is forecasted to be between 4.8 and 5.5 percent. The spread for 2015 lies from 5.1 to 6.0 percent.

When total return of investment properties in 2013 is published 25th February at the annual Index Conference, three out of four participants in the Danish Property Federation Consensus Forecast are confident that it will be an increased total return compared to 2012 and 2011. In 2013 a total return of 5.0 percent compared to 4.8 percent in 2012 is expected. For the last five years, the highest total return has been 5.3 percent (in 2010). A smaller group of 30 percent of the participants expects that this will exceed in 2013. Compared to last quarter the expectations for 2013, 2014, and 2015 are unchanged, while there is a decrease of 0.1 percentage points for the expectations for 2013-2017.

For the year to come the expectations are still highest for residential, but for the first time in more than two years, we see a negative quarterly development in the indicator value for capital value in residential. The indica-

tor point value is 28.4, which is still the highest measured indicator value this quarter. The reason for this value is that 57 percent of the participants in the consensus forecast count on higher or much higher capital value for residential the next year.

Capital value has the best development in Copenhagen

The expectations for office and retail have slightly decreased. For office it is now occupied space, which has the most positive expectations, while it is capital value for retail.

Consensus on Copenhagen The participants still believe that capital values develop better in Copenhagen compared to the rest of the country. This consensus has been constant since the start of the consensus forecast in 2011. Source: The Danish Property Federation.

The economic advisers expect an economic growth in 2013 of 0.2 percent. That is an increase compared to 2012, where we saw a negative growth of 0.4 percent. In 2014 the economic advisers expect a growth of 1.6 percent and they expect a growth of 2.2 percent in 2015. This is a downgrade of 0.2 percentage points for 2014 and an upgrade of 0.3 percentage points in 2015 compared to their expectations in spring 2013. The belief in an increase in 2015 is due to expectations of an increasing growth abroad and increased domestic demand. For 2013 the economic advisers expect an inflation of 0.8 percent, which is lower than expected earlier this year. If the expectations for inflation proves correct, it is the lowest inflation level since 1953. They expect an inflation in 2014 and 2015 of 1.3 and 1.9 percent respectively.

51 market players participated in this forecast. 43 percent of the participants are property owners. Furthermore, 25 percent are commercial brokers, 10 percent are banks/mortgage providers, and 22 percent are other players.

Expectation of progress in 2013