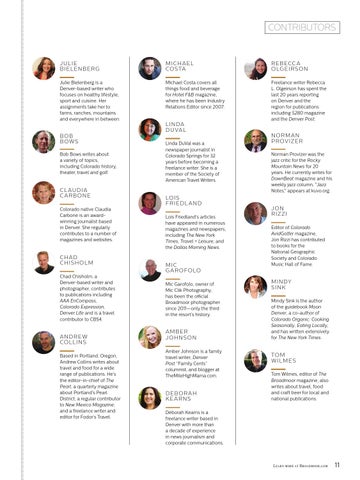 Julie Bielenberg is a Denver-based writer who focuses on healthy lifestyle, sport and cuisine. Her assignments take her to farms, ranches, mountains and everywhere in between.

Michael Costa covers all things food and beverage for Hotel F&B magazine, where he has been Industry Relations Editor since 2007.

Freelance writer Rebecca L. Olgeirson has spent the last 20 years reporting on Denver and the region for publications including 5280 magazine and the Denver Post.

BOB B OWS Bob Bows writes about a variety of topics, including Colorado history, theater, travel and golf.

CL AUDIA C AR B O NE Colorado native Claudia Carbone is an awardwinning journalist based in Denver. She regularly contributes to a number of magazines and websites.

A NDR E W CO LLINS Based in Portland, Oregon, Andrew Collins writes about travel and food for a wide range of publications. He’s the editor-in-chief of The Pearl, a quarterly magazine about Portland’s Pearl District; a regular contributor to New Mexico Magazine; and a freelance writer and editor for Fodor’s Travel.

LINDA DU VAL Linda DuVal was a newspaper journalist in Colorado Springs for 32 years before becoming a freelance writer. She is a member of the Society of American Travel Writers.

LO IS FR IEDL A ND Lois Friedland's articles have appeared in numerous magazines and newspapers, including The New York Times, Travel + Leisure, and the Dallas Morning News.

MIC G AR O FO LO Mic Garofolo, owner of Mic Clik Photography, has been the official Broadmoor photographer since 2011—only the third in the resort’s history.

NORMAN PR OVIZER Norman Provizer was the jazz critic for the Rocky Mountain News for 20 years. He currently writes for DownBeat magazine and his weekly jazz column, "Jazz Notes," appears at kuvo.org.

MINDY SINK Mindy Sink is the author of the guidebook Moon Denver, a co-author of Colorado Organic: Cooking Seasonally, Eating Locally, and has written extensively for The New York Times.

Deborah Kearns is a freelance writer based in Denver with more than a decade of experience in news journalism and corporate communications. 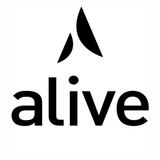 Answer the call of the wild with The Broadmoor Wilderness Experience. PLUS: Active Adventures, Five-Star Cuisine, Golf, Spa, Tennis, Shoppin...

Answer the call of the wild with The Broadmoor Wilderness Experience. PLUS: Active Adventures, Five-Star Cuisine, Golf, Spa, Tennis, Shoppin...