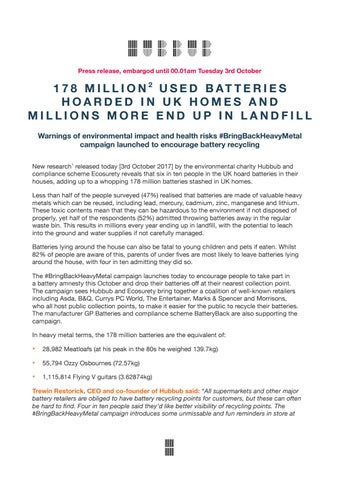 1 7 8 M I L L I O N 2 U S E D B AT T E R I E S HOARDED IN UK HOMES AND MILLIONS MORE END UP IN LANDFILL Warnings of environmental impact and health risks #BringBackHeavyMetal campaign launched to encourage battery recycling New research1 released today [3rd October 2017] by the environmental charity Hubbub and compliance scheme Ecosurety reveals that six in ten people in the UK hoard batteries in their houses, adding up to a whopping 178 million batteries stashed in UK homes. Less than half of the people surveyed (47%) realised that batteries are made of valuable heavy metals which can be reused, including lead, mercury, cadmium, zinc, manganese and lithium. These toxic contents mean that they can be hazardous to the environment if not disposed of properly, yet half of the respondents (52%) admitted throwing batteries away in the regular waste bin. This results in millions every year ending up in landfill, with the potential to leach into the ground and water supplies if not carefully managed. Batteries lying around the house can also be fatal to young children and pets if eaten. Whilst 82% of people are aware of this, parents of under fives are most likely to leave batteries lying around the house, with four in ten admitting they did so. The #BringBackHeavyMetal campaign launches today to encourage people to take part in a battery amnesty this October and drop their batteries off at their nearest collection point. The campaign sees Hubbub and Ecosurety bring together a coalition of well-known retailers including Asda, B&Q, Currys PC World, The Entertainer, Marks & Spencer and Morrisons, who all host public collection points, to make it easier for the public to recycle their batteries. The manufacturer GP Batteries and compliance scheme BatteryBack are also supporting the campaign. In heavy metal terms, the 178 million batteries are the equivalent of:

• 28,982 Meatloafs (at his peak in the 80s he weighed 139.7kg) • 55,794 Ozzy Osbournes (72.57kg) • 1,115,814 Flying V guitars (3.62874kg) Trewin Restorick, CEO and co-founder of Hubbub said: “All supermarkets and other major battery retailers are obliged to have battery recycling points for customers, but these can often be hard to find. Four in ten people said they’d like better visibility of recycling points. The #BringBackHeavyMetal campaign introduces some unmissable and fun reminders in store at

participating retailers which we hope will help raise awareness of how important and how easy it is to recycle batteries.” James Piper, Managing Director of Ecosurety said: “In 2016 only 44% of the UK’s used batteries were collected for recycling. That’s 380 tonnes short of the collection target, yet this new research shows that there is more than ten times the amount of the shortfall stashed away in people’s homes. We will soon have the facility to recycle batteries in the UK for the first time and we hope that people will be inspired by this campaign to empty their drawers, keep their used batteries out of the regular waste bins and drop them off at a recycling point instead.” More information on the Bring Back Heavy Metal campaign, including recycling locations and tips for reducing the environmental impact of batteries can be found at www.bringbackheavymetal.co.uk

Survey of a nationally representative sample of 3,055 UK adults conducted by Censuswide in August 2017

ABOUT HUBBUB Hubbub is a charity which explores innovative ways to interest mainstream consumers in important sustainability issues, through different ‘hubs’ of activity: Food; Fashion; Homes; Neighbourhoods; Sport and Leisure. Hubbub’s previous campaigns have included #SquareMileChallenge, the UK’s first large scale solution to coffee cup recycling, #GiftABundle to get pre-loved baby clothes back into circulation and #PumpkinRescue to encourage more people to eat the carvings from their Halloween Pumpkins. www.hubbub.org.uk Twitter: @hubbubuk

ABOUT ECOSURETY Founded in 2003, Ecosurety is the UK’s leading resource efficiency specialist with end to end services including batteries, packaging and WEEE compliance, training and waste collections.  With more than 1,000 customers including The Co-operative Group, Innocent and Virgin Media, Ecosurety is leading change in approaches to environmental compliance throughout the UK, driving ever greater efficiencies of resource use. Committed to reducing the environmental impact of UK businesses while improving performance, Ecosurety is targeting to influence over one million tonnes of waste by 2020. www.ecosurety.com

New research released by the environmental charity Hubbub and compliance scheme Ecosurety reveals that six in ten people in the UK hoard bat...

New research released by the environmental charity Hubbub and compliance scheme Ecosurety reveals that six in ten people in the UK hoard bat...