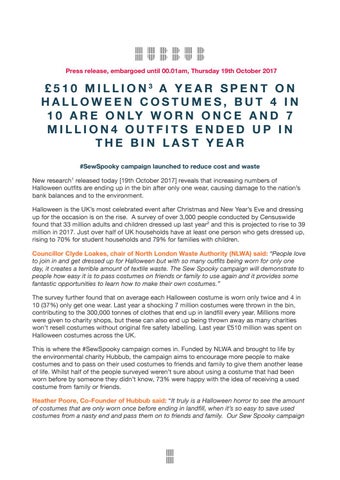 £510 MILLION3 A YEAR SPENT ON HALLOWEEN COSTUMES, BUT 4 IN 1 0 A R E O N LY W O R N O N C E A N D 7 MILLION4 OUTFITS ENDED UP IN THE BIN LAST YEAR #SewSpooky campaign launched to reduce cost and waste New research1 released today [19th October 2017] reveals that increasing numbers of Halloween outfits are ending up in the bin after only one wear, causing damage to the nation’s bank balances and to the environment. Halloween is the UK’s most celebrated event after Christmas and New Year’s Eve and dressing up for the occasion is on the rise. A survey of over 3,000 people conducted by Censuswide found that 33 million adults and children dressed up last year2 and this is projected to rise to 39 million in 2017. Just over half of UK households have at least one person who gets dressed up, rising to 70% for student households and 79% for families with children. Councillor Clyde Loakes, chair of North London Waste Authority (NLWA) said: “People love to join in and get dressed up for Halloween but with so many outfits being worn for only one day, it creates a terrible amount of textile waste. The Sew Spooky campaign will demonstrate to people how easy it is to pass costumes on friends or family to use again and it provides some fantastic opportunities to learn how to make their own costumes.” The survey further found that on average each Halloween costume is worn only twice and 4 in 10 (37%) only get one wear. Last year a shocking 7 million costumes were thrown in the bin, contributing to the 300,000 tonnes of clothes that end up in landfill every year. Millions more were given to charity shops, but these can also end up being thrown away as many charities won’t resell costumes without original fire safety labelling. Last year £510 million was spent on Halloween costumes across the UK. This is where the #SewSpooky campaign comes in. Funded by NLWA and brought to life by the environmental charity Hubbub, the campaign aims to encourage more people to make costumes and to pass on their used costumes to friends and family to give them another lease of life. Whilst half of the people surveyed weren’t sure about using a costume that had been worn before by someone they didn’t know, 73% were happy with the idea of receiving a used costume from family or friends. Heather Poore, Co-Founder of Hubbub said: “It truly is a Halloween horror to see the amount of costumes that are only worn once before ending in landfill, when it’s so easy to save used costumes from a nasty end and pass them on to friends and family. Our Sew Spooky campaign

also includes lots of quick and easy ideas for spook-tacular costumes that a child could make, which can make for a fun half-term activity.” More information on the Sew Spooky campaign, including ideas for quick and easy costumes to make and tips for hosting a costume swap can be found at https://www.hubbub.org.uk/Event/ get-sewspooky-make-a-diy-halloween-costume Ends

FURTHER FINDINGS FROM THE SURVEY

• Supermarkets are the most popular place to buy outfits (47%), followed by online and fancy dress shops.

• The average spent on each Halloween costume last year was £15.56, adding up to £510 million spent on costumes across the UK.

• Across the UK last year witches, vampires and ghosts topped the list of most popular costumes and these traditional costumes are set to be top again this year.

• Politicians and film characters are a popular choice of costume for adults and last year saw 1.4m Donald Trumps and 2.1m Harley Quinns

Average spend on each Halloween costume

Yorkshire and the Humber 59%

ABOUT HUBBUB Hubbub is a charity which explores innovative ways to interest mainstream consumers in important sustainability issues, through different ‘hubs’ of activity: Food; Fashion; Homes; Neighbourhoods; Sport and Leisure. Hubbub’s previous campaigns have included #SquareMileChallenge, the UK’s first large scale solution to coffee cup recycling, #GiftABundle to get pre-loved baby clothes back into circulation and #PumpkinRescue to encourage more people to eat the carvings from their Halloween Pumpkins. www.hubbub.org.uk

New research released today [19th October 2017] reveals that increasing numbers of Halloween outfits are ending up in the bin after only one...

New research released today [19th October 2017] reveals that increasing numbers of Halloween outfits are ending up in the bin after only one...