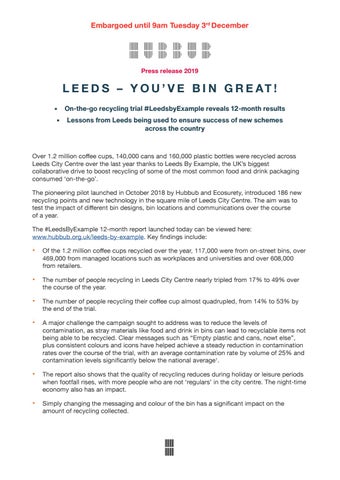 Embargoed until 9am Tuesday 3rd December

Over 1.2 million coffee cups, 140,000 cans and 160,000 plastic bottles were recycled across Leeds City Centre over the last year thanks to Leeds By Example, the UK’s biggest collaborative drive to boost recycling of some of the most common food and drink packaging consumed ‘on-the-go’. The pioneering pilot launched in October 2018 by Hubbub and Ecosurety, introduced 186 new recycling points and new technology in the square mile of Leeds City Centre. The aim was to test the impact of different bin designs, bin locations and communications over the course of a year. The #LeedsByExample 12-month report launched today can be viewed here: www.hubbub.org.uk/leeds-by-example. Key findings include:

• The number of people recycling in Leeds City Centre nearly tripled from 17% to 49% over the course of the year.

• The number of people recycling their coffee cup almost quadrupled, from 14% to 53% by the end of the trial.

contamination, as stray materials like food and drink in bins can lead to recyclable items not being able to be recycled. Clear messages such as “Empty plastic and cans, nowt else”, plus consistent colours and icons have helped achieve a steady reduction in contamination rates over the course of the trial, with an average contamination rate by volume of 25% and contamination levels significantly below the national average1.

when footfall rises, with more people who are not ‘regulars’ in the city centre. The night-time economy also has an impact.

• Simply changing the messaging and colour of the bin has a significant impact on the amount of recycling collected.

Gavin Ellis, Co-founder and Director of Hubbub said: “We have learned a huge amount from this trial and would like to thank the people of Leeds and our partners for their support. The information we’ve gathered will inform many similar programmes in the future and we hope this will have a huge impact on recycling on-the-go levels across the UK. The city is now leading by example when it comes to recycling.” Leeds By Example will continue to thrive, as Leeds City Council have now taken over waste collections and are continuing to work with local partner Zero Waste Leeds to promote and monitor the scheme. They are keen to increase the number of recycling points over time and to build on what’s been learnt to date. Cllr Al Garthwaite, Deputy Executive Member for Environment and Active Lifestyles said: “The huge success of this groundbreaking initiative shows that not only is Leeds city centre growing and thriving, but that busy Leeds people are really keen to help the city respond to the climate emergency by doing their bit. The council will continue to explore new ways to help people recycle more items more easily, alongside promoting reuse and ways to reduce excess waste.” Leeds By Example has brought together a unique range of partners who are funding the scheme and 29 local partners including Leeds City Council. Leeds By Example and the overall Recycling on the Go initiative is backed by: PHASE ONE: Alupro, Asda, Association of Convenience Stores, Ball Beverage Packaging Europe, British Plastics Federation, Bunzl, Caffè Nero, Coca-Cola GB, Costa Coffee, Co-op, Crown Packaging, Danone, Ecosurety, Greggs, Highland Spring, Innocent Group, Klöckner Pentaplast (kp), Lucozade Ribena Suntory, Marks and Spencer, McDonald’s UK, Morrisons, PepsiCo, Pret a Manger, Starbucks and Shell. PHASE TWO: Starbucks, Ecosurety, Asda, Bunzl, Caffè Nero, Coca-Cola GB, Costa Coffee, Danone, Highland Spring Group, Innocent Group, Lucozade Ribena Suntory, Marks & Spencer, McDonald’s UK, Nestlé, Pret a Manger and Shell. The campaign was rolled out in Swansea and Edinburgh this autumn and will continue until the Spring. The findings will then help Hubbub create an Inspiration Guide to help other towns and cities implement effective recycling on-the-go. For further information on Leeds By Example, the overall Recycling on the Go initiative and to get involved visit https://www.hubbub.org.uk/leeds-by-example

The average contamination rate by weight was 39%, compared with the national average of 51%.

186 new recycling points and new technology were introduced in the square mile of Leeds City Centre, including:

messaging including 35 litter bins reskinned as recycling bins, 20 had a circular yellow aperture .

• Four plastic and can bins in Seacroft, a suburban area in East Leeds. • The We Recycle app, developed by OPRL, was tested for the first time in Leeds in phase one to help the public locate on-the-go recycling for drinks packaging.