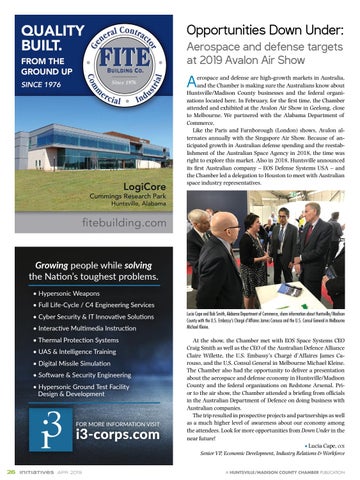 Opportunities Down Under: Aerospace and defense targets at 2019 Avalon Air Show

erospace and defense are high-growth markets in Australia, and the Chamber is making sure the Australians know about Huntsville/Madison County businesses and the federal organizations located here. In February, for the first time, the Chamber attended and exhibited at the Avalon Air Show in Geelong, close to Melbourne. We partnered with the Alabama Department of Commerce. Like the Paris and Farnborough (London) shows, Avalon alternates annually with the Singapore Air Show. Because of anticipated growth in Australian defense spending and the reestablishment of the Australian Space Agency in 2018, the time was right to explore this market. Also in 2018, Huntsville announced its first Australian company – EOS Defense Systems USA – and the Chamber led a delegation to Houston to meet with Australian space industry representatives.

At the show, the Chamber met with EOS Space Systems CEO Craig Smith as well as the CEO of the Australian Defence Alliance Claire Willette, the U.S. Embassy’s Chargé d’Affaires James Carouso, and the U.S. Consul General in Melbourne Michael Kleine. The Chamber also had the opportunity to deliver a presentation about the aerospace and defense economy in Huntsville/Madison County and the federal organizations on Redstone Arsenal. Prior to the air show, the Chamber attended a briefing from officials in the Australian Department of Defence on doing business with Australian companies. The trip resulted in prospective projects and partnerships as well as a much higher level of awareness about our economy among the attendees. Look for more opportunities from Down Under in the near future! ■ Lucia Cape, cce Senior VP, Economic Development, Industry Relations & Workforce A HUNTSVILLE/MADISON COUNTY CHAMBER PUBLICATION