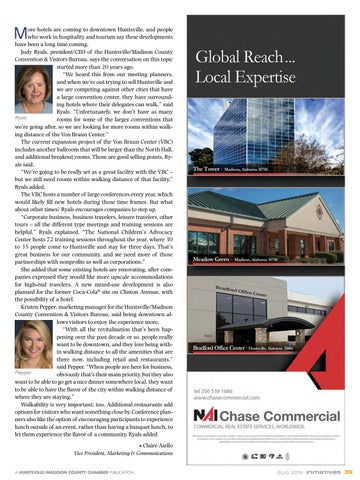 ore hotels are coming to downtown Huntsville, and people who work in hospitality and tourism say these developments have been a long time coming. Judy Ryals, president/CEO of the Huntsville/Madison County Convention & Visitors Bureau, says the conversation on this topic started more than 20 years ago. “We heard this from our meeting planners, and when we’re out trying to sell Huntsville and we are competing against other cities that have a large convention center, they have surrounding hotels where their delegates can walk,” said Ryals. “Unfortunately, we don’t have as many Ryals rooms for some of the larger conventions that we’re going after, so we are looking for more rooms within walking distance of the Von Braun Center.” The current expansion project of the Von Braun Center (VBC) includes another ballroom that will be larger than the North Hall, and additional breakout rooms. Those are good selling points, Ryals said. “We’re going to be really set as a great facility with the VBC – but we still need rooms within walking distance of that facility,” Ryals added. The VBC hosts a number of large conferences every year, which would likely fill new hotels during those time frames. But what about other times? Ryals encourages companies to step up. “Corporate business, business travelers, leisure travelers, other tours – all the different type meetings and training sessions are helpful,” Ryals explained. “The National Children’s Advocacy Center hosts 72 training sessions throughout the year, where 30 to 35 people come to Huntsville and stay for three days. That’s great business for our community, and we need more of those partnerships with nonprofits as well as corporations.” She added that some existing hotels are renovating, after companies expressed they would like more upscale accommodations for high-end travelers. A new mixed-use development is also planned for the former Coca-Cola® site on Clinton Avenue, with the possibility of a hotel. Kristen Pepper, marketing manager for the Huntsville/Madison County Convention & Visitors Bureau, said being downtown allows visitors to enjoy the experience more. “With all the revitalization that’s been happening over the past decade or so, people really want to be downtown, and they love being within walking distance to all the amenities that are there now, including retail and restaurants,” said Pepper. “When people are here for business, Pepper obviously that’s their main priority, but they also want to be able to go get a nice dinner somewhere local, they want to be able to have the flavor of the city within walking distance of where they are staying.” Walkability is very important, too. Additional restaurants add options for visitors who want something close by. Conference planners also like the option of encouraging participants to experience lunch outside of an event, rather than having a banquet lunch, to let them experience the flavor of a community, Ryals added. ■ Claire Aiello Vice President, Marketing & Communications A HUNTSVILLE/MADISON COUNTY CHAMBER PUBLICATION