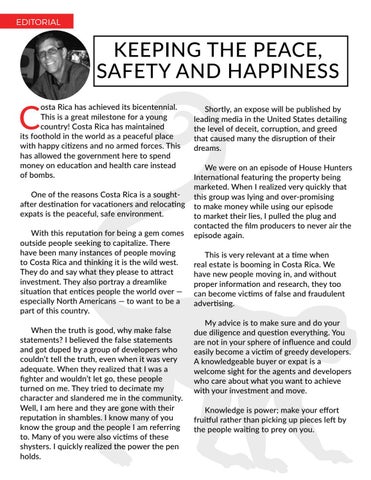 KEEPING THE PEACE, SAFETY AND HAPPINESS

osta Rica has achieved its bicentennial. This is a great milestone for a young country! Costa Rica has maintained its foothold in the world as a peaceful place with happy citizens and no armed forces. This has allowed the government here to spend money on education and health care instead of bombs. One of the reasons Costa Rica is a soughtafter destination for vacationers and relocating expats is the peaceful, safe environment. With this reputation for being a gem comes outside people seeking to capitalize. There have been many instances of people moving to Costa Rica and thinking it is the wild west. They do and say what they please to attract investment. They also portray a dreamlike situation that entices people the world over — especially North Americans — to want to be a part of this country. When the truth is good, why make false statements? I believed the false statements and got duped by a group of developers who couldn’t tell the truth, even when it was very adequate. When they realized that I was a fighter and wouldn’t let go, these people turned on me. They tried to decimate my character and slandered me in the community. Well, I am here and they are gone with their reputation in shambles. I know many of you know the group and the people I am referring to. Many of you were also victims of these shysters. I quickly realized the power the pen holds.

Shortly, an expose will be published by leading media in the United States detailing the level of deceit, corruption, and greed that caused many the disruption of their dreams. We were on an episode of House Hunters International featuring the property being marketed. When I realized very quickly that this group was lying and over-promising to make money while using our episode to market their lies, I pulled the plug and contacted the film producers to never air the episode again. This is very relevant at a time when real estate is booming in Costa Rica. We have new people moving in, and without proper information and research, they too can become victims of false and fraudulent advertising. My advice is to make sure and do your due diligence and question everything. You are not in your sphere of influence and could easily become a victim of greedy developers. A knowledgeable buyer or expat is a welcome sight for the agents and developers who care about what you want to achieve with your investment and move. Knowledge is power; make your effort fruitful rather than picking up pieces left by the people waiting to prey on you. 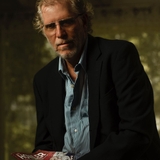 Howler is excited to congratulate Costa Rica on its bicentennial anniversary of Independence Day, September 15, 2021. Check out our commemor...

Howler is excited to congratulate Costa Rica on its bicentennial anniversary of Independence Day, September 15, 2021. Check out our commemor...