THE PARTY OF FREEDOM AND LIBERTY

WHAT FREEDOM MEANS TO ME..

“Freedom, generally, is having the ability to act or change without constraint. A person has the freedom to do things that will not, in theory, or in practice, be prevented by other forces. Outside of the human realm, freedom generally does not have this political or psychological dimension. Freedom means African Americans not being murdered unjustly by law enforcement. Freedom is quality education for every person. Freedom is when Black America is paid reparations. When that is done Blacks will enjoy financial freedom in my opinion.”

THE PARTY OF FREEDOM AND LIBERTY FOR ALL... I met former Judge Loyd Wright way back during the 2014 Midterm Election cycle. This was back during a time when the gap between the Harris County Democratic Party and the Harris County Republican Party wasn’t so vast. Former Judge Loyd Wright and I enjoyed good success back in those 2014 Midterms. Now, in case you don’t remember, he handily defeated his Democratic rival, Kim Bohannon Hoesl by garning 55.18% of the vote. But a lot has happened since those days. My friend lost his bench back during the 2018 Midterm Election. And I must tell you that I was heartbroken by the fact that I couldn’t help him hold onto his Harris County Probate Court #1 bench. However, I am pleased to now announce that former Judge Loyd Wright will have the full support and endorsement of our “NON-PARTISAN READER BOARD” on Tuesday, November 8, 2022, in the upcoming Midterm Election for Texas.

I don’t care if America is more black, brown, white (pick your color). I care that America remains a country of individuals who believe in freedom and limited government and don’t want to be led by people who just use them to obtain power and don’t really believe in their God-given abilities to chart their own destiny.” Candidate for Harris County Probate Court No. 1 PD. POL. AD BY LOYD H. WRIGHT CAMPAIGN

In the process of voting and returning your mail ballot, make sure to follow the steps below:

1). Read all the instructions; 2). Use BLACK or BLUE ink to mark your choices on the ballot; 3). Place voted ballot in the Ballot Envelope and seal it; 4). Place Ballot Envelope in the enclosed pre-addressed carrier envelope; 5). Provide your identification number underneath the flap. 6). Seal carrier envelope and sign where indicated exactly as you signed the ballot by mail request; 7). Place appropriate postage and return it;

A completed mail ballot MUST be returned to the Harris County Election Administrator’s Office in the Official Carrier Envelope provided to you. It may be returned in any of the following manners:

Freedom from an overreaching government.

Unelected bureaucrats and our federal government should not overregulate and dictate how we live our daily lives. We believe that prosperity for all comes through the free market and policies that encourage job development, economic growth and entrepreneurship in the United States vs. promoting a global economy that sacrifices American jobs and national security.

Freedom from those who want to weaken the sanctity of our elections.

We believe that all Americans should have confidence in the integrity of our elections and that each vote cast is cast by a citizen who has the legal right to vote. Without elections that are fair, open and transparent, the very foundation of our democracy is at risk.

The rights of criminals do not trump the rights of the law-abiding citizen. Activist judges and defunding police tears down the laws that are there to protect the rights of the individual and prevent mob rule. All Americans deserve to live their lives and raise their families in neighborhoods that are free from crime.

Our children should have the right to an education that will give them the knowledge and skills to have a successful life and one that is free from indoctrination. We believe that teach-

ing our country’s history (warts and all) is necessary to ensure mistakes are not repeated. We also oppose teachers and administration that impose their personal beliefs on our children and promote racism and division through policies like critical race theory. We believe that school policies should support educational achievement and provide parents the freedom to make the best academic choice for their children.

Freedom from democrats who want to limit our freedoms.

We believe in a limited government that allows every American the freedom to live their life in the way they choose. We believe the government and elected officials are there to serve and protect all Americans (including the unborn), not the elite few. We believe it is not the purpose of government to dictate our religion, how we raise our children, or how we live our lives.

THE PARTY OF FREEDOM AND LIBERTY FOR “ALL” AUBREY R. TAYLOR: “What does Freedom and Liberty mean to you?

HCRP CHAIR CINDY SIEGEL: “They are two of the most beautiful words in the dictionary. It means that I have the personal freedom to make decisions on how I am going to live my life. They mean that I and my daughters have the opportunity to make our lives into whatever we want with hard work. However, along with freedom and liberty goes personal responsibility. That means working to ensure that we continue to have freedom and liberty now and for future generations because without America standing for freedom and liberty - where do people go?”

The County Judge’s job is to provide a safe and secure community for families, one that supports growth and opportunity for all residents...That’s not currently happening — and I’m running because I can fix it.” — Alex

On Tuesday, November 8, 2022, in the Midterm Election, Gerry Wayne Monroe will be running for State Representative for House District 131 against State Rep. Alma Allen. Early voting will begin on Monday, October 24, 2022, and end on Friday, November 4, 2022. Houston Business Connections Newspaper is published by Aubrey R. Taylor Communications. All Rights Reserved. 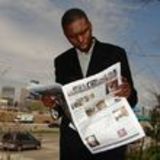