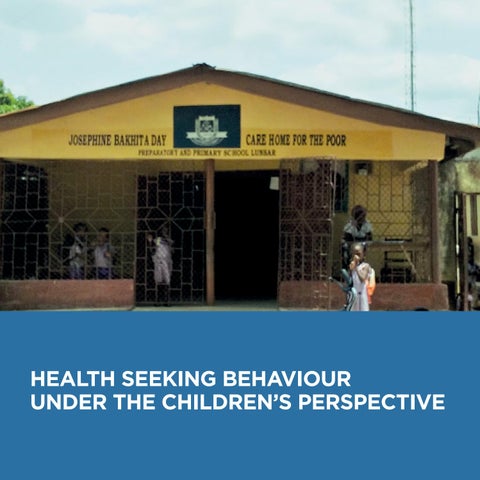 DRAWINGS FROM CHILDREN 6 TO 8 YEARS OLD

“What do your parents do whenever you fall ill”?

By Facilitators Photos by

INTRODUCTION The Saint John of God Catholic Services Strategic Plan (2014-2019) defined comprehensive Primary Health Care in the local communities as one of the key areas to be strengthen, starting from a health assessment as one of the key elements. The health assessment was conducted during a period of two months, from the 16th April to 16th June 2018, in the catchment area of the hospital. The approach was designed to provide a rapid and comprehensive assessment of the health care system management, resources and functions within the network of primary health care, taking into account the Basic Package of Essential Health Services (BPEHS) 2015-2020 of Sierra Leone which outlines a set of efficient, high quality primary and secondary health care services accessible, equitable and affordable for all . It focused on the factors involved in each step that hinder or facilitate a prompt treatment and access to care classified in four main categories: i) illness perception and explanatory models; ii) decision making and social values; iii) access to care and resource seeking; and iv) medical pluralism, different types of health provision that coexist and their relationships to one another. To analyse the determinants that influence access, the multidimensional reality that balance issues from the perspective of the users and providers has been considered, with a particular interest to see them dimensioned in relation to the different elements of availability, affordability, acceptability, accessibility and quality. For this purpose, the health assessment relied heavily on the perceptions of community leaders and community health workers, including traditional healers & stakeholders, and staff from the heath facilities based on the assumption that being the real users and proponents of health services, they are best placed to analyse performance, identify barriers and help develop realistic and prioritized proposals. The study has also taken into account other relevant key informants such as TB and HIV patients, mothers from children admitted in the hospital, bike riders as the main means of transport to the health facilities, journalists and school children.

The Preparatory and Primary School of Bakhita in Lunsar was selected to participate in this exercise in an attempt to gain better understanding of the steps people take to seek health care when they fall ill, taking into account the different types of health provision that coexist in the catchment area of St. John of God hospital. The school was mainly oriented to attract a population of children taking care of their parents suffering from “river blindness” who were facing a difficult situation and were not attending any school. It is due to a disease called onchocerciasis, which physical manifestations have devastated the quality of life of those living in endemic communities and severely reduced their economic earning capacity as well as the educational opportunities of the younger generation caring for their blind elders. Sierra Leone is concentrating efforts to achieve the goal of onchocerciasis elimination by 2025. The drawings in this book reflect the perspective of 15 children, including girls and boys from a 6 to 8 years of age who attended the session. We asked them to draw whatever came to their mind when asked:

“what do your parents do whenever you fall ill”

A cup was very much present in many drawings, they said, to take the medicines. Half of the pictures include only the maternal figure, the other half drew both father and mother (and siblings). Be that as it may, the majority of the children mentioned that it was their mothers who took care of them. We observe that mothers are giving them drugs at home.

“My mother gives me the cup to take drugs”

All therapy choices, biomedicine, traditional medicine and home treatment coexist and determine patient’s itineraries. It is important to bear in mind that the exercise took place in Lunsar, an urban setting, where there is easy access to the community health centre as well as the hospital. Drugs are being sold in the market. There here are also many quack drug-peddlers; around 30-40 drug-sellers have been identified in the streets without any kind of quality control. Both situations encourage self-medication, which is widely extended. It is one of the main reasons behind late arrivals of the patients to the health facilities.

“My mother went to the market and buy some medise”

The drawings show several means of transport (ambulance and cars) to seek health-care. However, in rural areas there are communities that do not have access by road and have to go to the health facilities on foot. â&#x20AC;&#x153;Moto carsâ&#x20AC;? were also drawn. There are more than 1500 drivers in the Bike Union of Lunsar that work as taxi drivers and send patients to the community health centre or the hospital. There is only an ambulance available in the hospital and it is just used for pregnant women during labour.

Almost all the drawings include a house. From the explanations of the children it seems to indicate that they manage their conditions at home. A child said that he had included a house in the drawing because he slept when he was sick. Most pictures also include a flower, a plant and some drew an apple. There were different interpretations when asking the children: some said the mother were giving them as a medicine before going to the hospital and others talked about the benefits of the fruits or they just mentioned "to make the house beautiful".

“My mother takes plants and gives it as a medicine”

“I eat an apple when I am sick”

Few children mentioned native medicine, some herbs called Bam-bam and leaves for malaria, to mash them.

“A plant has fruits in it”

Another common element in the drawings were the Sierra Leonean flag: "It gives me hope" From the drawing and what the children expressed, we can conclude that the first option when they are sick is self-medication at home provided by their mother and that if it doesn't work they go to the hospital or the health centre. 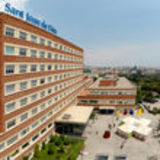