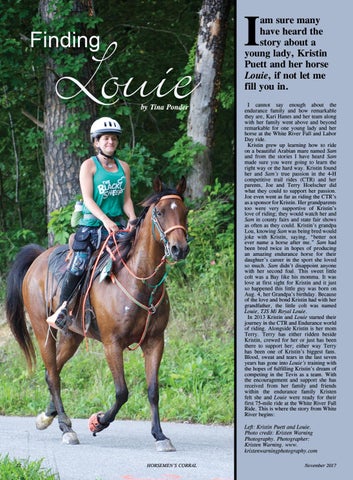 am sure many have heard the story about a young lady, Kristin Puett and her horse Louie, if not let me fill you in.

I cannot say enough about the endurance family and how remarkable they are, Kari Hanes and her team along with her family went above and beyond remarkable for one young lady and her horse at the White River Fall and Labor Day ride. Kristin grew up learning how to ride on a beautiful Arabian mare named Sam and from the stories I have heard Sam made sure you were going to learn the right way or the hard way. Kristin found her and Sam’s true passion in the 4-H competitive trail rides (CTR) and her parents, Joe and Terry Hoelscher did what they could to support her passion. Joe even went as far as riding the CTR’s as a sponsor for Kristin. Her grandparents too were very supportive of Kristin’s love of riding; they would watch her and Sam in county fairs and state fair shows as often as they could. Kristin’s grandpa Lou, knowing Sam was being bred would joke with Kristin, saying, “better not ever name a horse after me.” Sam had been bred twice in hopes of producing an amazing endurance horse for their daughter’s career in the sport she loved so much. Sam didn’t disappoint anyone with her second foal. This sweet little colt was a Bay like his momma. It was love at first sight for Kristin and it just so happened this little guy was born on Aug. 4, her Grandpa’s birthday. Because of the love and bond Kristin had with her grandfather, the little colt was named Louie, TJS Mi Royal Louie. In 2013 Kristin and Louie started their journey in the CTR and Endurance world of riding. Alongside Kristin is her mom Terry. Terry has either ridden beside Kristin, crewed for her or just has been there to support her; either way Terry has been one of Kristin’s biggest fans. Blood, sweat and tears in the last seven years has gone into Louie’s training with the hopes of fulfilling Kristin’s dream of competing in the Tevis as a team. With the encouragement and support she has received from her family and friends within the endurance family Kristen felt she and Louie were ready for their first 75-mile ride at the White River Fall Ride. This is where the story from White River begins: Left: Kristin Puett and Louie. Photo credit: Kristen Warning Photography. Photographer: Kristen Warning. www. kristenwarningphotography.com 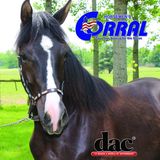