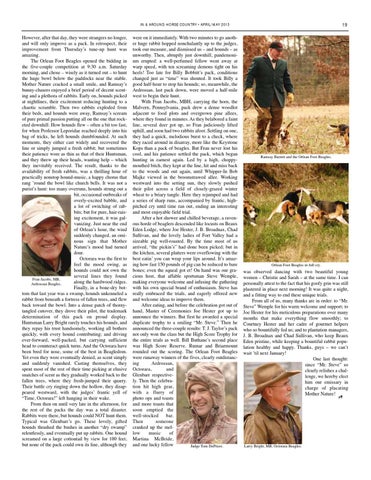 However, after that day, they were strangers no longer, and will only improve as a pack. In retrospect, their improvement from Thursday’s tune-up hunt was amazing. The Orlean Foot Beagles opened the bidding in the five-couple competition at 9:30 a.m. Saturday morning, and chose – wisely as it turned out – to hunt the huge bowl below the paddocks near the stable. Mother Nature cracked a small smile, and Ramsay’s bunny-chasers enjoyed a brief period of decent scenting and a plethora of rabbits. Early on, hounds picked at nightlines, their excitement reducing hunting to a chaotic scramble. Then two rabbits exploded from their beds, and hounds were away, Ramsay’s scream of pure primal passion putting all on the one that rocketed downhill. How hounds flew – often a bit too fast, for when Professor Leporidae reached deeply into his bag of tricks, he left hounds dumbfounded. At such moments, they either cast widely and recovered the line or simply jumped a fresh rabbit; but sometimes their patience wore as thin as that of their Huntsman, and they threw up their heads, wanting help – which they inevitably received. The result, thanks to the availability of fresh rabbits, was a thrilling hour of practically nonstop hound-music, a happy chorus that rang ’round the bowl like church bells. It was not a purist’s hunt: too many overruns, hounds strung out a bit, occasional outbreaks of overly-excited babble, and a lot of switching of rabbits; but for pure, hair-raising excitement, it was galvanizing. Just near the end of Orlean’s hour, the wind suddenly changed, an ominous sign that Mother Nature’s mood had turned dour. Octorara was the first to feel the mood swing, as hounds could not own the several lines they found Fran Jacobs, MB, along the hardwood ridges. Ardrossan Beagles. Finally, in a bone-dry bottom that last year was a swamp, hounds unkenneled a rabbit from beneath a fortress of fallen trees, and flew back toward the bowl. Into a dense patch of thornytangled cutover, they drove their pilot, the trademark determination of this pack on proud display. Huntsman Larry Bright rarely touches his hounds, and they repay his trust handsomely, working all bothers quickly, with every hound contributing; and driving ever-forward, well-packed, but carrying sufficient head to counteract quick turns. And the Octorara have been bred for nose, some of the best in Beagledom. Yet even they were eventually denied, as scent simply and suddenly vanished. Casting themselves, they spent most of the rest of their time picking at elusive snatches of scent as they gradually worked back to the fallen trees, where they fresh-jumped their quarry. Their battle cry ringing down the hollow, they disappeared westward, with the judges’ frantic yell of “Time, Octorara!” left hanging in their wake. From then on until very late in the afternoon, for the rest of the packs the day was a total disaster. Rabbits were there, but hounds could NOT hunt them. Typical was Glenbarr’s go. These lovely, gifted hounds thrashed the bushes in another “dry swamp” relentlessly, and eventually put up rabbits. One hound screamed on a large cottontail by view for 100 feet, but none of the pack could own its line, although they

were on it immediately. With two minutes to go another huge rabbit hopped nonchalantly up to the judges, took our measure, and dismissed us – and hounds – as unworthy. Then, abruptly just downhill, pandemonium erupted: a well-perfumed fellow went away at warp speed, with ten screaming demons tight on his heels! Too late for Billy Bobbitt’s pack, conditions changed just as “time” was shouted. It took Billy a good half-hour to stop his hounds; so, meanwhile, the Ardrossan, last pack down, were moved a half-mile west to begin their hunt. With Fran Jacobs, MBH, carrying the horn, the Malvern, Pennsylvania, pack drew a dense woodlot adjacent to food plots and overgrown pine allees, where they found in minutes. As they belabored a faint line, several deer got up, so Fran judiciously lifted uphill, and soon had two rabbits afoot. Settling on one, they had a quick, melodious burst to a check, where they raced around in disarray, more like the Keystone Kops than a pack of beagles. But Fran never lost his cool, and his patience settled the pack, which began hunting in earnest again. Led by a high, choppymouthed bitch, they kept at the line, hit and miss back to the woods and out again, until Whipper-In Bob Majke viewed in the broomstrawed allee. Working westward into the setting sun, they slowly pushed their pilot across a field of closely-grazed winter wheat to a briary tangle. Here they rejumped and had a series of sharp runs, accompanied by frantic, highpitched cry until time ran out, ending an interesting and most enjoyable field trial. After a hot shower and chilled beverage, a ravenous horde of beaglers descended like locusts on Beaux Eden Lodge, where Joe Hester, J. B. Broadnax, Chad Sullivan, and the lovely ladies of Fort Valley had a sizeable pig well-roasted. By the time most of us arrived, “the pickin’s” had done been picked; but in the kitchen, several platters were overflowing with the best eatin’ you can wrap your lips around. It’s amazing how fast 150 pounds of pig can be reduced to bare bones; even the squeal got et! On hand was our gracious host, that affable sportsman Steve Wemple, making everyone welcome and infusing the gathering with his own special brand of enthusiasm. Steve has really embraced the trials, and eagerly offered new and welcome ideas to improve them. After eating, and before the celebration got out of hand, Master of Ceremonies Joe Hester got up to announce the winners. But first he awarded a special duplicate trophy to a smiling “Mr. Steve.” Then he announced the three-couple results: T. J. Taylor’s pack not only won the class but the High Score Trophy for the entire trials as well. Bill Buthane’s second place was High Score Reserve. Rumar and Briarmount rounded out the scoring. The Orlean Foot Beagles were runaway winners of the fives, clearly outdistancing Ardrossan, Octorara, and Glenbarr respectively. Then the celebration hit high gear, with a flurry of photo ops and toasts and more toasts that soon emptied the well-stocked bar. Then someone cranked up the mellow music of Martina McBride, and one lucky fellow Judge Tom DePriest.

was observed dancing with two beautiful young women – Christie and Sarah – at the same time. I can personally attest to the fact that his goofy grin was still plastered in place next morning! It was quite a night, and a fitting way to end these unique trials. From all of us, many thanks are in order: to “Mr. Steve” Wemple for his warm welcome and support; to Joe Hester for his meticulous preparations over many months that make everything flow smoothly; to Courtney Hester and her cadre of gourmet helpers who so bountifully fed us; and to plantation managers, J. B. Broadnax and Chad Sullivan, who keep Beaux Eden pristine, while keeping a bountiful rabbit population healthy and happy. Thanks, guys – we can’t wait ’til next January! One last thought: since “Mr. Steve” so clearly relishes a challenge, we hereby elect him our emissary in charge of placating Mother Nature! 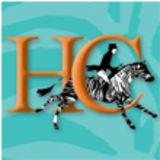 In & Around Horse Country

The Official Publication of the Virginia Steeplechase Association

In & Around Horse Country

The Official Publication of the Virginia Steeplechase Association