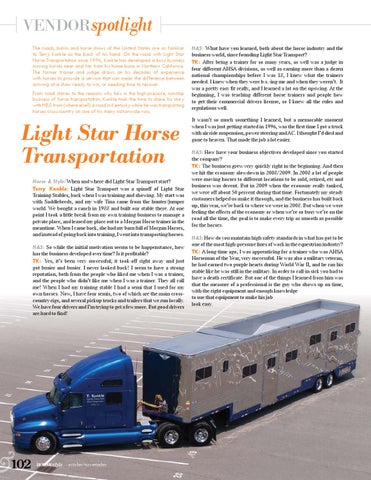 VENDORspotlight The roads, barns and horse shows of the United States are as familiar to Terry Konkle as the back of his hand. On the road with Light Star Horse Transportation since 1996, Konkle has developed a busy business moving horses near and far from his home base in Northern California. The former trainer and judge draws on his decades of experience with horses to provide a service that can mean the difference between arriving at a show ready to win, or needing time to recover. From road stories to the reasons why he’s in the high-pressure, nonstop business of horse transportation, Konkle took the time to share his story with H&S from (where else?) a road in Kentucky while he was transporting horses cross-country on one of his many nationwide runs.

Light Star Horse Transportation Horse & Style: When and where did Light Star Transport start? Terry Konkle: Light Star Transport was a spinoff of Light Star Training Stables, back when I was training and showing. My start was with Saddlebreds, and my wife Tina came from the hunter/jumper world. We bought a ranch in 1988 and built our stable there. At one point I took a little break from my own training business to manage a private place, and leased my place out to a Morgan Horse trainer in the meantime. When I came back, she had my barn full of Morgan Horses, and instead of going back into training, I went into transporting horses.

H&S: So while the initial motivation seems to be happenstance, how has the business developed over time? Is it profitable?

TK: Yes, it’s been very successful; it took-off right away and just got busier and busier. I never looked back! I seem to have a strong reputation, both from the people who liked me when I was a trainer, and the people who didn’t like me when I was a trainer. They all call me! When I had my training stable I had a semi that I used for my own horses. Now, I have four semis, two of which are the main crosscountry rigs, and several pickup trucks and trailers that we run locally. We have four drivers and I’m trying to get a few more. But good drivers are hard to find!

H&S: What have you learned, both about the horse industry and the business world, since founding Light Star Transport? TK: After being a trainer for so many years, as well was a judge in four different AHSA divisions, as well as earning more than a dozen national championships before I was 18, I knew what the trainers needed. I knew when they were b.s.-ing me and when they weren’t. It was a pretty easy fit really, and I learned a lot on the upswing. At the beginning, I was teaching different horse trainers and people how to get their commercial drivers license, so I knew all the rules and regulations well. It wasn’t so much something I learned, but a memorable moment when I was just getting started in 1996, was the first time I got a truck with air ride suspension, power steering and AC. I thought I’d died and gone to heaven. That made the job a lot easier.

H&S: How have your business objectives developed since you started the company?

TK: The business grew very quickly right in the beginning. And then we hit the economy slowdown in 2008/2009. In 2008 a lot of people were moving horses to different locations to be sold, retired, etc and business was decent. But in 2009 when the economy really tanked, we were off about 50 percent during that time. Fortunately my steady customers helped us make it through, and the business has built back up, this year, we’re back to where we were in 2008. But when we were feeling the effects of the economy or when we’re so busy we’re on the road all the time, the goal is to make every trip as smooth as possible for the horses.

H&S: How do you maintain high safety standards in what has got to be one of the most high-pressure lines of work in the equestrian industry?

TK: A long time ago, I was apprenticing for a trainer who was AHSA Horseman of the Year, very successful. He was also a military veteran, he had earned two purple hearts during World War II, and he ran his stable like he was still in the military. In order to call-in sick you had to have a death certificate. But one of the things I learned from him was that the measure of a professional is the guy who shows up on time, with the right equipment and enough knowledge to use that equipment to make his job look easy.

H&S unveils the beauty of the Chicago Hunter Derby, and discovers what inspired George Morris to initiate the derbies in our cover story. W...

H&S unveils the beauty of the Chicago Hunter Derby, and discovers what inspired George Morris to initiate the derbies in our cover story. W...