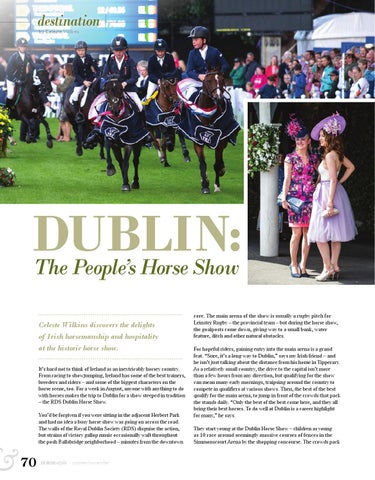 DUBLIN: The People’s Horse Show Celeste Wilkins discovers the delights of Irish horsemanship and hospitality at the historic horse show. It’s hard not to think of Ireland as an inextricably horsey country. From racing to showjumping, Ireland has some of the best trainers, breeders and riders – and some of the biggest characters on the horse scene, too. For a week in August, anyone with anything to do with horses makes the trip to Dublin for a show steeped in tradition – the RDS Dublin Horse Show. You’d be forgiven if you were sitting in the adjacent Herbert Park and had no idea a busy horse show was going on across the road. The walls of the Royal Dublin Society (RDS) disguise the action, but strains of victory gallop music occasionally waft throughout the posh Ballsbridge neighborhood – minutes from the downtown

core. The main arena of the show is usually a rugby pitch for Leinster Rugby – the provincial team – but during the horse show, the goalposts come down, giving way to a small bank, water feature, ditch and other natural obstacles. For hopeful riders, gaining entry into the main arena is a grand feat. “Sure, it’s a long way to Dublin,” says my Irish friend – and he isn’t just talking about the distance from his home in Tipperary. As a relatively small country, the drive to the capital isn’t more than a few hours from any direction, but qualifying for the show can mean many early mornings, traipsing around the country to compete in qualifiers at various shows. Then, the best of the best qualify for the main arena, to jump in front of the crowds that pack the stands daily. “Only the best of the best come here, and they all bring their best horses. To do well at Dublin is a career highlight for many,” he says. They start young at the Dublin Horse Show – children as young as 10 race around seemingly massive courses of fences in the Simmonscourt Arena by the shopping concourse. The crowds pack 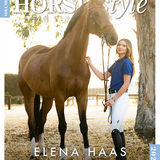