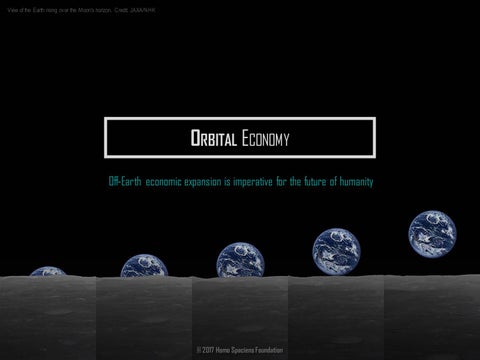 2050 ORBITAL ECONOMY As the technologies for access to space improve and become more cost effective, new space-based industries will sprout leading to the emergence of an off-Earth economy. By 2050, the Orbital Economy —comprised of businesses involved in taking passengers into space, producing microgravity-based products, mining near-earth asteroids, and harnessing space solar energy— will be a multi-trillion dollar off-Earth economy, generating millions of jobs and vast marketplaces for exchange. OR B I TA L EC O N OM Y 20 50

Opportunity: There are 1.2 million tones of helium-3 enough to supply the energy needs of the Earth for at least a thousand years.

Opportunity: There are tens of millions of asteroids in space containing all kind of ores and valuable minerals which can be extracted.

Benefits: Establishing a permanent base on the moon is an essential step towards future manned missions to Mars and deep space.

Benefits: Mining asteroids in space will provide sustainable resources on Earth and will allow extended human presence in space.

Opportunity: The microgravity changes the structure and behaviour of matter, which can be used to produce all kind of new materials.

Opportunity: Space solar energy is 10 times greater than on Earth and can be collected to produce power regardless of weather/daytime.

Benefits: The rise of robotics and 3D printing will slash the cost of operations in space, and thus bringing the space industrial revolution.

Benefits: Harnessing clean solar energy from space could eliminate our dependence on fossil fuels and contribute to the environment.

Achieving affordable access to space will accelerate the development of space-based industries like space tourism. OR B I TA L EC O N OM Y 20 50

SPACE TRANSPORTATION UNLOCKING THE ACCESS TO THE SPACE FRONTIER

• The space launch market is w orth $10 billion annually (an average of 60 launches a year).

• The challenge is to develop viable plans to create a hypersonic suborbital spacecraft for the transportation of passengers and cargo.

• Initially, due to the high cost, would be limited to high-paying tourists, micro satellite delivery, very urgent cargo; or for fast-response EMS.

• Space launches are expected to grow with the demand for satellites (over 900 to be launched by 2020) and space tourism ─projected to be a billion dollar industry by the end of decade.

Harnessing clean solar energy from space will eliminate our dependence on fossil fuels and nuclear energy. OR B I TA L EC O N OM Y 20 50

The Orbit of the Moon

• Solar radiation in space is about 5 to 25 times stronger than on the Earth's surface and it can be collected uninterruptibly ─ 24h a day.

• The challenge is to develop viable plans to establish space power plants to collect the solar energy and then beam it dow n to Earth.

• Space solar power is a source of energy that has the potential to solve the w orld's energy needs and greenhouse emission problems.

• Everything from laptops to electric vehicles will be capable of running and re-charging themselves w ithout ever being plugged in.

Mining asteroids in space will provide humanity a source of sustainable and infinite resources for Earth. OR B I TA L EC O N OM Y 20 50

• One asteroid could contain 30 million tons of nickel, 1.5 million tons of metal cobalt and 7,500 tons of platinum. The platinum alone w ould have a value of more than $150 billion.

• The challenge is to develop viable plans to establish asteroid-based mining operations to extract ores, metals and other resources.

• The asteroids selected for establishing mines will eventually become comfortable habitats. As these habitats grow, the Asteroid Belt w ill be turned into a band of life, circling the sun.

• There are about 10 billion asteroids greater than 100 m in diameter in our solar system.

• Advanced research in robotic s and artif icial intelligence to enable novel applications and new work techniques such as self-mining.

• The Asteroid Belt will be the largest economy and trade area of the entire Solar System.

Manufacturing in space will lead to a new industrial revolution that will radically transform the economy and society. OR B I TA L EC O N OM Y 20 50

• Because of the weightlessness environment, chemical and metal products can be mixed and blended evenly (e.g. intermetallic alloys).

• The challenge is to develop viable plans to establish space manufacturing facilities for the processing of non-terrestrial materials.

• Crystalline structures, like proteins or minerals, can be artific ially grown into complex shapes. (e.g. high purity medicines and vaccines).

• Advanced research in 3D printing technology to enable new capabilities for the design and manufacturing of space-based products.

• Large-scale space manufacturing will lead to the development of a space-based economy. 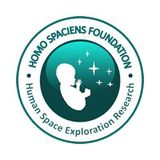 Off-Earth economic expansion will come into existence by 2030

Off-Earth economic expansion will come into existence by 2030