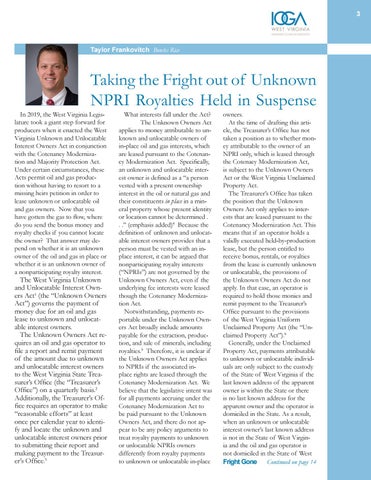 Taking the Fright out of Unknown NPRI Royalties Held in Suspense

In 2019, the West Virginia Legislature took a giant step forward for producers when it enacted the West Virginia Unknown and Unlocatable Interest Owners Act in conjunction with the Cotenancy Modernization and Majority Protection Act. Under certain circumstances, these Acts permit oil and gas production without having to resort to a missing heirs petition in order to lease unknown or unlocatable oil and gas owners. Now that you have gotten the gas to flow, where do you send the bonus money and royalty checks if you cannot locate the owner? That answer may depend on whether it is an unknown owner of the oil and gas in place or whether it is an unknown owner of a nonparticipating royalty interest.

owners. At the time of drafting this article, the Treasurer’s Office has not taken a position as to whether money attributable to the owner of an NPRI only, which is leased through the Cotenacy Modernization Act, is subject to the Unknown Owners Act or the West Virginia Unclaimed Property Act. The Treasurer’s Office has taken the position that the Unknown Owners Act only applies to interests that are leased pursuant to the Cotenancy Modernization Act. This means that if an operator holds a validly executed held-by-production lease, but the person entitled to receive bonus, rentals, or royalties from the lease is currently unknown or unlocatable, the provisions of the Unknown Owners Act do not apply. In that case, an operator is required to hold those monies and remit payment to the Treasurer’s Office pursuant to the provisions of the West Virginia Uniform Unclaimed Property Act (the “Unclaimed Property Act”).6 Generally, under the Unclaimed Property Act, payments attributable to unknown or unlocatable individuals are only subject to the custody of the State of West Virginia if the last known address of the apparent owner is within the State or there is no last known address for the apparent owner and the operator is domiciled in the State. As a result, when an unknown or unlocatable interest owner’s last known address is not in the State of West Virginia and the oil and gas operator is not domiciled in the State of West Fright Gone Continued on page 14