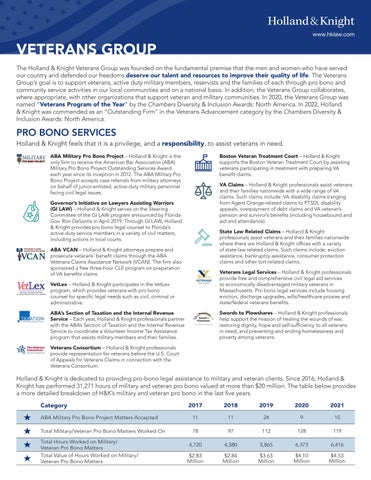 VETERANS GROUP The Holland &amp; Knight Veterans Group was founded on the fundamental premise that the men and women who have served our country and defended our freedoms deserve our talent and resources to improve their quality of life. The Veterans Group’s goal is to support veterans, active duty military members, reservists and the families of each through pro bono and community service activities in our local communities and on a national basis. In addition, the Veterans Group collaborates, where appropriate, with other organizations that support veteran and military communities. In 2020, the Veterans Group was named “Veterans Program of the Year” by the Chambers Diversity &amp; Inclusion Awards: North America. In 2022, Holland &amp; Knight was commended as an “Outstanding Firm” in the Veterans Advancement category by the Chambers Diversity &amp; Inclusion Awards: North America.

Swords to Plowshares – Holland &amp; Knight professionals help support the mission of healing the wounds of war, restoring dignity, hope and self-sufficiency to all veterans in need, and preventing and ending homelessness and poverty among veterans.

Participating in Wreaths Across America in Dallas and Arlington

COLLABORATION WITH OTHER ORGANIZATIONS Holland &amp; Knight Veterans Group is at the forefront of military and veteran initiatives nationwide and collaborates with other organizations that share its core values. NLSVCC Holland &amp; Knight professionals have advised and assisted the National Law School Veterans Clinic Consortium (NLSVCC), and Law Schools for Vets clinics, which recently received its official recognition as the nation&#39;s 93rd Veterans Service Organization.

Nicholas Hasenfus was appointed in 2019 to serve a three-year term on the American Bar Association&#39;s (ABA) Standing Committee on Legal Assistance for Military Personnel (LAMP Committee). Dan Sylvester previously served on the ABA&#39;s LAMP Committee from 2016 to 2019.

Holland &amp; Knight is the only law firm member of the Veteran Jobs Mission, a private sector-led coalition committed to hiring U.S. military veterans and military spouses. The coalition now comprises of more than 250 companies that represent almost every industry in the American economy. 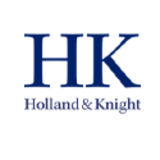