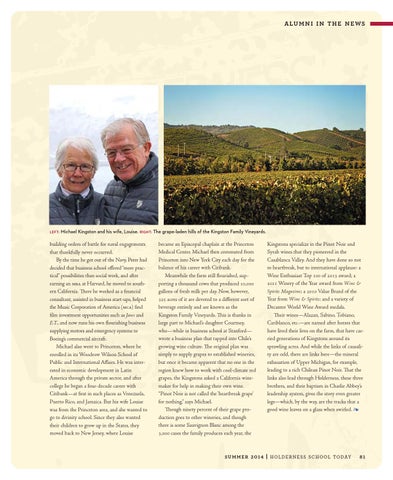 ALUMNI IN THE NEWS

LEFT: Michael Kingston and his wife, Louise. RIGHT: The grape-laden hills of the Kingston Family Vineyards.

building orders of battle for naval engagements that thankfully never occurred. By the time he got out of the Navy, Peter had decided that business school oﬀered “more practical” possibilities than social work, and after earning an mba at Harvard, he moved to southern California. There he worked as a ﬁnancial consultant, assisted in business start-ups, helped the Music Corporation of America (mca) ﬁnd ﬁlm investment opportunities such as Jaws and E.T., and now runs his own ﬂourishing business supplying motors and emergency systems to Boeing’s commercial aircraft. Michael also went to Princeton, where he enrolled in its Woodrow Wilson School of Public and International Aﬀairs. He was interested in economic development in Latin America through the private sector, and after college he began a four-decade career with Citibank—at ﬁrst in such places as Venezuela, Puerto Rico, and Jamaica. But his wife Louise was from the Princeton area, and she wanted to go to divinity school. Since they also wanted their children to grow up in the States, they moved back to New Jersey, where Louise

became an Episcopal chaplain at the Princeton Medical Center. Michael then commuted from Princeton into New York City each day for the balance of his career with Citibank. Meanwhile the farm still ﬂourished, supporting a thousand cows that produced , gallons of fresh milk per day. Now, however,  acres of it are devoted to a diﬀerent sort of beverage entirely and are known as the Kingston Family Vineyards. This is thanks in large part to Michael’s daughter Courtney, who—while in business school at Stanford— wrote a business plan that tapped into Chile’s growing wine culture. The original plan was simply to supply grapes to established wineries, but once it became apparent that no one in the region knew how to work with cool-climate red grapes, the Kingstons asked a California winemaker for help in making their own wine. “Pinot Noir is not called the ‘heartbreak grape’ for nothing,” says Michael. Though ninety percent of their grape production goes to other wineries, and though there is some Sauvignon Blanc among the , cases the family produces each year, the

Kingstons specialize in the Pinot Noir and Syrah wines that they pioneered in the Casablanca Valley. And they have done so not to heartbreak, but to international applause: a Wine Enthusiast Top  of  award; a  Winery of the Year award from Wine &amp; Spirits Magazine; a  Value Brand of the Year from Wine &amp; Spirits; and a variety of Decanter World Wine Award medals. Their wines—Alazan, Sabino, Tobiano, Cariblanco, etc.—are named after horses that have lived their lives on the farm, that have carried generations of Kingstons around its sprawling acres. And while the links of causality are odd, there are links here—the mineral exhaustion of Upper Michigan, for example, leading to a rich Chilean Pinot Noir. That the links also lead through Holderness, these three brothers, and their baptism in Charlie Abbey’s leadership system, gives the story even greater legs—which, by the way, are the tracks that a good wine leaves on a glass when swirled.