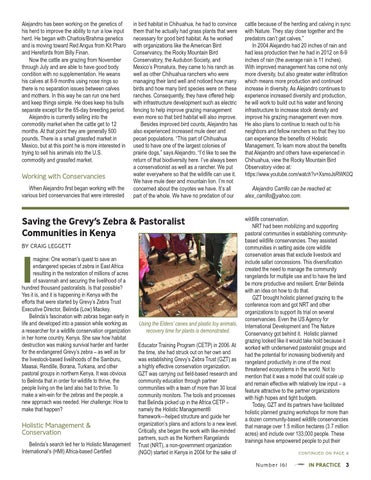 Alejandro has been working on the genetics of his herd to improve the ability to run a low input herd. He began with Charlois/Brahma genetics and is moving toward Red Angus from Kit Pharo and Herefords from Billy Finan. Now the cattle are grazing from November through July and are able to have good body condition with no supplementation. He weans his calves at 8-9 months using nose rings so there is no separation issues between calves and mothers. In this way he can run one herd and keep things simple. He does keep his bulls separate except for the 65-day breeding period. Alejandro is currently selling into the commodity market when the cattle get to 12 months. At that point they are generally 500 pounds. There is a small grassfed market in Mexico, but at this point he is more interested in trying to sell his animals into the U.S. commodity and grassfed market.

in bird habitat in Chihuahua, he had to convince them that he actually had grass plants that were necessary for good bird habitat. As he worked with organizations like the American Bird Conservancy, the Rocky Mountain Bird Conservatory, the Audubon Society, and Mexico’s Pronatura, they came to his ranch as well as other Chihuahua ranchers who were managing their land well and noticed how many birds and how many bird species were on these ranches. Consequently, they have offered help with infrastructure development such as electric fencing to help improve grazing management even more so that bird habitat will also improve. Besides improved bird counts, Alejandro has also experienced increased mule deer and pecari populations. “This part of Chihuahua used to have one of the largest colonies of prairie dogs,” says Alejandro. “I’d like to see the return of that biodiversity here. I’ve always been a conservationist as well as a rancher. We put water everywhere so that the wildlife can use it. We have mule deer and mountain lion. I’m not concerned about the coyotes we have. It’s all part of the whole. We have no predation of our

magine: One woman’s quest to save an endangered species of zebra in East Africa resulting in the restoration of millions of acres of savannah and securing the livelihood of a hundred thousand pastoralists. Is that possible? Yes it is, and it is happening in Kenya with the efforts that were started by Grevy’s Zebra Trust Executive Director, Belinda (Low) Mackey. Belinda’s fascination with zebras began early in life and developed into a passion while working as a researcher for a wildlife conservation organization in her home country, Kenya. She saw how habitat destruction was making survival harder and harder for the endangered Grevy’s zebra – as well as for the livestock-based livelihoods of the Samburu, Maasai, Rendille, Borana, Turkana, and other pastoral groups in northern Kenya. It was obvious to Belinda that in order for wildlife to thrive, the people living on the land also had to thrive. To make a win-win for the zebras and the people, a new approach was needed. Her challenge: How to make that happen?

Educator Training Program (CETP) in 2006. At the time, she had struck out on her own and was establishing Grevy’s Zebra Trust (GZT) as a highly effective conservation organization. GZT was carrying out field-based research and community education through partner communities with a team of more than 30 local community monitors. The tools and processes that Belinda picked up in the Africa CETP – namely the Holistic Management® framework—helped structure and guide her organization’s plans and actions to a new level. Critically, she began the work with like-minded partners, such as the Northern Rangelands Trust (NRT), a non-government organization (NGO) started in Kenya in 2004 for the sake of

cattle because of the herding and calving in sync with Nature. They stay close together and the predators can’t get calves.” In 2004 Alejandro had 20 inches of rain and had less production then he had in 2012 on 8-9 inches of rain (the average rain is 11 inches). With improved management has come not only more diversity, but also greater water infiltration which means more production and continued increase in diversity. As Alejandro continues to experience increased diversity and production, he will work to build out his water and fencing infrastructure to increase stock density and improve his grazing management even more. He also plans to continue to reach out to his neighbors and fellow ranchers so that they too can experience the benefits of Holistic Management. To learn more about the benefits that Alejandro and others have experienced in Chihuahua, view the Rocky Mountain Bird Observatory video at: https://www.youtube.com/watch?v=XsmoJsRWK0Q Alejandro Carrillo can be reached at: alex_carrillo@yahoo.com.

wildlife conservation. NRT had been mobilizing and supporting pastoral communities in establishing communitybased wildlife conservancies. They assisted communities in setting aside core wildlife conservation areas that exclude livestock and include safari concessions. This diversification created the need to manage the community rangelands for multiple use and to have the land be more productive and resilient. Enter Belinda with an idea on how to do that. GZT brought holistic planned grazing to the conference room and got NRT and other organizations to support its trial on several conservancies. Even the US Agency for International Development and The Nature Conservancy got behind it. Holistic planned grazing looked like it would take hold because it worked with underserved pastoralist groups and had the potential for increasing biodiversity and rangeland productivity in one of the most threatened ecosystems in the world. Not to mention that it was a model that could scale up and remain effective with relatively low input – a feature attractive to the partner organizations with high hopes and tight budgets. Today, GZT and its partners have facilitated holistic planned grazing workshops for more than a dozen community-based wildlife conservancies that manage over 1.5 million hectares (3.7 million acres) and include over 133,000 people. These trainings have empowered people to put their CONTINUED ON PAGE 4