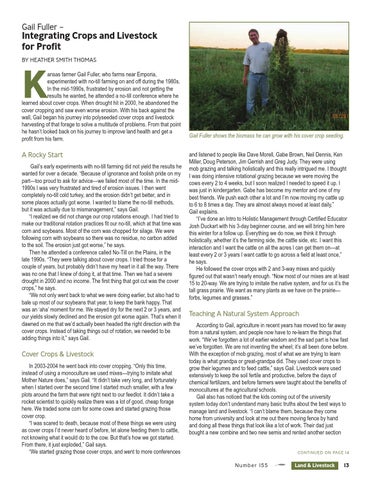 Integrating Crops and Livestock for Profit BY HEATHER SMITH THOMAS

ansas farmer Gail Fuller, who farms near Emporia, experimented with no-till farming on and off during the 1980s. In the mid-1990s, frustrated by erosion and not getting the results he wanted, he attended a no-till conference where he learned about cover crops. When drought hit in 2000, he abandoned the cover cropping and saw even worse erosion. With his back against the wall, Gail began his journey into polyseeded cover crops and livestock harvesting of that forage to solve a multitude of problems. From that point he hasn’t looked back on his journey to improve land health and get a profit from his farm.

Gail’s early experiments with no-till farming did not yield the results he wanted for over a decade. “Because of ignorance and foolish pride on my part—too proud to ask for advice—we failed most of the time. In the mid1990s I was very frustrated and tired of erosion issues. I then went completely no-till cold turkey, and the erosion didn’t get better, and in some places actually got worse. I wanted to blame the no-till methods, but it was actually due to mismanagement,” says Gail. “I realized we did not change our crop rotations enough. I had tried to make our traditional rotation practices fit our no-till, which at that time was corn and soybeans. Most of the corn was chopped for silage. We were following corn with soybeans so there was no residue, no carbon added to the soil. The erosion just got worse,” he says. Then he attended a conference called No-Till on the Plains, in the late 1990s. “They were talking about cover crops. I tried those for a couple of years, but probably didn’t have my heart in it all the way. There was no one that I knew of doing it, at that time. Then we had a severe drought in 2000 and no income. The first thing that got cut was the cover crops,” he says. “We not only went back to what we were doing earlier, but also had to bale up most of our soybeans that year, to keep the bank happy. That was an ‘aha’ moment for me. We stayed dry for the next 2 or 3 years, and our yields slowly declined and the erosion got worse again. That’s when it dawned on me that we’d actually been headed the right direction with the cover crops. Instead of taking things out of rotation, we needed to be adding things into it,” says Gail.

In 2003-2004 he went back into cover cropping. “Only this time, instead of using a monoculture we used mixes—trying to imitate what Mother Nature does,” says Gail. “It didn’t take very long, and fortunately when I started over the second time I started much smaller, with a few plots around the farm that were right next to our feedlot. It didn’t take a rocket scientist to quickly realize there was a lot of good, cheap forage here. We traded some corn for some cows and started grazing those cover crop. “I was scared to death, because most of these things we were using as cover crops I’d never heard of before, let alone feeding them to cattle, not knowing what it would do to the cow. But that’s how we got started. From there, it just exploded,” Gail says. “We started grazing those cover crops, and went to more conferences

Gail Fuller shows the biomass he can grow with his cover crop seeding. and listened to people like Dave Morell, Gabe Brown, Neil Dennis, Ken Miller, Doug Peterson, Jim Gerrish and Greg Judy. They were using mob grazing and talking holistically and this really intrigued me. I thought I was doing intensive rotational grazing because we were moving the cows every 2 to 4 weeks, but I soon realized I needed to speed it up. I was just in kindergarten. Gabe has become my mentor and one of my best friends. We push each other a lot and I’m now moving my cattle up to 6 to 8 times a day. They are almost always moved at least daily,” Gail explains. “I’ve done an Intro to Holistic Management through Certified Educator Josh Duckart with his 3-day beginner course, and we will bring him here this winter for a follow up. Everything we do now, we think it through holistically, whether it’s the farming side, the cattle side, etc. I want this interaction and I want the cattle on all the acres I can get them on—at least every 2 or 3 years I want cattle to go across a field at least once,” he says. He followed the cover crops with 2 and 3-way mixes and quickly figured out that wasn’t nearly enough. “Now most of our mixes are at least 15 to 20-way. We are trying to imitate the native system, and for us it’s the tall grass prairie. We want as many plants as we have on the prairie— forbs, legumes and grasses.”

According to Gail, agriculture in recent years has moved too far away from a natural system, and people now have to re-learn the things that work. “We’ve forgotten a lot of earlier wisdom and the sad part is how fast we’ve forgotten. We are not inventing the wheel; it’s all been done before. With the exception of mob grazing, most of what we are trying to learn today is what grandpa or great-grandpa did. They used cover crops to grow their legumes and to feed cattle,” says Gail. Livestock were used extensively to keep the soil fertile and productive, before the days of chemical fertilizers, and before farmers were taught about the benefits of monocultures at the agricultural schools. Gail also has noticed that the kids coming out of the university system today don’t understand many basic truths about the best ways to manage land and livestock. “I can’t blame them, because they come home from university and look at me out there moving fence by hand and doing all these things that look like a lot of work. Their dad just bought a new combine and two new semis and rented another section CONTINUED ON PAGE 14