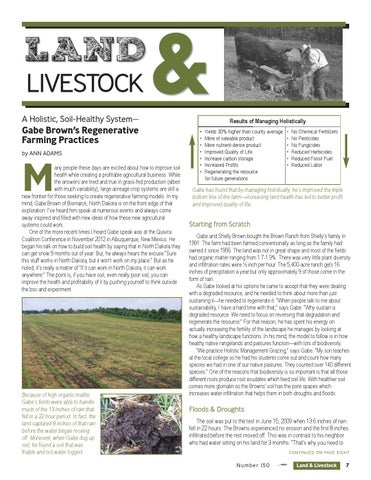 any people these days are excited about how to improve soil health while creating a profitable agricultural business. While the answers are tried and true in grass-fed production (albeit with much variability), large acreage crop systems are still a new frontier for those seeking to create regenerative farming models. In my mind, Gabe Brown of Bismarck, North Dakota is on the front edge of that exploration. I’ve heard him speak at numerous events and always come away inspired and filled with new ideas of how these new agricultural systems could work. One of the more recent times I heard Gabe speak was at the Quivira Coalition Conference in November 2012 in Albuquerque, New Mexico. He began his talk on how to build soil health by saying that in North Dakota they can get snow 9 months out of year. But, he always hears the excuse “Sure this stuff works in North Dakota, but it won’t work on my place.” But as he noted, it’s really a matter of “If it can work in North Dakota, it can work anywhere.” The point is, if you have soil, even really poor soil, you can improve the health and profitability of it by pushing yourself to think outside the box and experiment.

Because of high organic matter, Gabe’s fields were able to handle much of the 13 inches of rain that fell in a 22 hour period. In fact, the land captured 8 inches of that rain before the water began moving off. Moreover, when Gabe dug up soil, he found a soil that was friable and not water logged.

Gabe has found that by managing holistically, he’s improved the triple bottom line of the farm—increasing land health has led to better profit and improved quality of life.

Starting from Scratch Gabe and Shelly Brown bought the Brown ranch from Shelly’s family in 1991. The farm had been farmed conventionally as long as the family had owned it since 1956. The land was not in great shape and most of the fields had organic matter ranging from 1.7-1.9%. There was very little plant diversity and infiltration rates were ½ inch per hour. The 5,400-acre ranch gets 16 inches of precipitation a year but only approximately 9 of those come in the form of rain. As Gabe looked at his options he came to accept that they were dealing with a degraded resource, and he needed to think about more than just sustaining it—he needed to regenerate it. “When people talk to me about sustainability, I have a hard time with that,” says Gabe. “Why sustain a degraded resource. We need to focus on reversing that degradation and regenerate the resource.” For that reason, he has spent his energy on actually increasing the fertility of the landscape he manages by looking at how a healthy landscape functions. In his mind, the model to follow is in how healthy native rangelands and pastures function—with lots of biodiversity. “We practice Holistic Management Grazing,” says Gabe. “My son teaches at the local college so he had his students come out and count how many species we had in one of our native pastures. They counted over 140 different species.” One of the reasons that biodiversity is so important is that all those different roots produce root exudates which feed soil life. With healthier soil comes more glomalin so the Browns’ soil has the pore spaces which increases water infiltration that helps them in both droughts and floods.

Floods & Droughts The soil was put to the test in June 15, 2009 when 13.6 inches of rain fell in 22 hours. The Browns experienced no erosion and the first 8 inches infiltrated before the rest moved off. This was in contrast to his neighbor who had water sitting on his land for 3 months. “That’s why you need to CONTINUED ON PAGE EIGHT