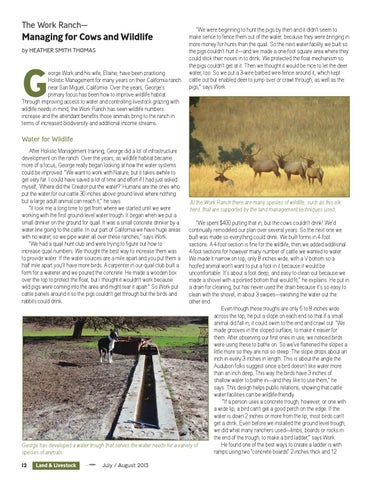 Managing for Cows and Wildlife by HEATHER SMITH THOMAS

eorge Work and his wife, Elaine, have been practicing Holistic Management for many years on their California ranch near San Miguel, California. Over the years, George’s primary focus has been how to improve wildlife habitat. Through improving access to water and controlling livestock grazing with wildlife needs in mind, the Work ranch has seen wildlife numbers increase and the attendant benefits those animals bring to the ranch in terms of increased biodiversity and additional income streams.

“We were beginning to hunt the pigs by then and it didn’t seem to make sense to fence them out of the water, because they were bringing in more money for hunts than the quail. So the next water facility we built so the pigs couldn’t hurt it—and we made a one-foot square area where they could stick their noses in to drink. We protected the float mechanism so the pigs couldn’t get at it. Then we thought it would be nice to let the deer water, too. So we put a 3-wire barbed wire-fence around it, which kept cattle out but enabled deer to jump over or crawl through, as well as the pigs,” says Work.

Water for Wildlife After Holistic Management training, George did a lot of infrastructure development on the ranch. Over the years, as wildlife habitat became more of a focus, George really began looking at how the water systems could be improved. “We want to work with Nature, but it takes awhile to get very far. I could have saved a lot of time and effort if I had just asked myself, ‘Where did the Creator put the water?’ Humans are the ones who put the water for our cattle 30 inches above ground level where nothing but a large adult animal can reach it,” he says. “It took me a long time to get from where we started until we were working with the first ground-level water trough. It began when we put a small drinker on the ground for quail. It was a small concrete drinker by a water line going to the cattle. In our part of California we have huge areas with no water, so we pipe water all over these ranches,” says Work. “We had a quail hunt club and were trying to figure out how to increase quail numbers. We thought the best way to increase them was to provide water. If the water sources are a mile apart and you put them a half mile apart you’ll have more birds. A carpenter in our quail club built a form for a waterer and we poured the concrete. He made a wooden box over the top to protect the float, but I thought it wouldn’t work because wild pigs were coming into the area and might tear it apart.” So Work put cattle panels around it so the pigs couldn’t get through but the birds and rabbits could drink.

At the Work Ranch there are many species of wildlife, such as this elk herd, that are supported by the land management techniques used.

“We spent $400 putting that in, but the cows couldn’t drink! We’d continually remodeled our plan over several years. So the next one we built was made so everything could drink. We built forms in 4-foot sections. A 4-foot section is fine for the wildlife, then we added additional 4-foot sections for however many number of cattle we wanted to water. We made it narrow on top, only 8 inches wide, with a V bottom so a hoofed animal won’t want to put a foot in it because it would be uncomfortable. It’s about a foot deep, and easy to clean out because we made a shovel with a pointed bottom that would fit,” he explains. He put in a drain for cleaning, but has never used the drain because it’s so easy to clean with the shovel, in about 3 swipes—swishing the water out the other end. Even though these troughs are only 6 to 8 inches wide across the top, he put a slope on each end so that if a small animal did fall in, it could swim to the end and crawl out. “We made grooves in the sloped surface, to make it easier for them. After observing our first ones in use, we noticed birds were using these to bathe on. So we’ve flattened the slopes a little more so they are not so steep. The slope drops about an inch in every 3 inches in length. This is about the angle the Audubon folks suggest since a bird doesn’t like water more than an inch deep. This way the birds have 3 inches of shallow water to bathe in—and they like to use them,” he says. This design helps public relations, showing that cattle water facilities can be wildlife-friendly. “If a person uses a concrete trough, however, or one with a wide lip, a bird can’t get a good perch on the edge. If the water is down 2 inches or more from the lip, most birds can’t get a drink. Even before we installed the ground level trough, we did what many ranchers used—limbs, boards or rocks in the end of the trough, to make a bird ladder,” says Work. He found one of the best ways to create a ladder is with George has developed a water trough that serves the water needs for a variety of ramps using two “concrete boards” 2 inches thick and 12 species of animals. 12