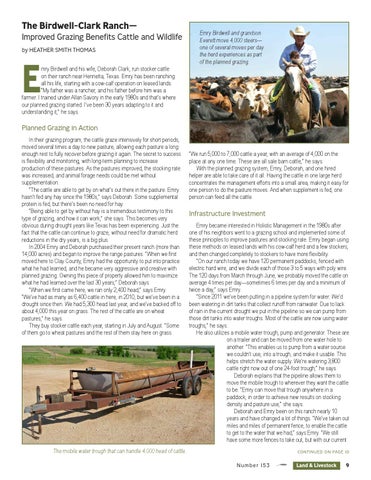 Emry Birdwell and grandson Everett move 4,000 steers— one of several moves per day the herd experiences as part of the planned grazing.

mry Birdwell and his wife, Deborah Clark, run stocker cattle on their ranch near Henrietta, Texas. Emry has been ranching all his life, starting with a cow-calf operation on leased lands. “My father was a rancher, and his father before him was a farmer. I trained under Allan Savory in the early 1980s and that’s where our planned grazing started. I’ve been 30 years adapting to it and understanding it,” he says.

Planned Grazing in Action In their grazing program, the cattle graze intensively for short periods, moved several times a day to new pasture, allowing each pasture a long enough rest to fully recover before grazing it again. The secret to success is flexibility and monitoring, with long-term planning to increase production of these pastures. As the pastures improved, the stocking rate was increased, and animal forage needs could be met without supplementation. “The cattle are able to get by on what’s out there in the pasture. Emry hasn’t fed any hay since the 1980s,” says Deborah. Some supplemental protein is fed, but there’s been no need for hay. “Being able to get by without hay is a tremendous testimony to this type of grazing, and how it can work,” she says. This becomes very obvious during drought years like Texas has been experiencing. Just the fact that the cattle can continue to graze, without need for dramatic herd reductions in the dry years, is a big plus. In 2004 Emry and Deborah purchased their present ranch (more than 14,000 acres) and began to improve the range pastures. “When we first moved here to Clay County, Emry had the opportunity to put into practice what he had learned, and he became very aggressive and creative with planned grazing. Owning this piece of property allowed him to maximize what he had learned over the last 30 years,” Deborah says. “When we first came here, we ran only 2,400 head,” says Emry. “We’ve had as many as 6,400 cattle in here, in 2010, but we’ve been in a drought since then. We had 5,300 head last year, and we’ve backed off to about 4,000 this year on grass. The rest of the cattle are on wheat pastures,” he says. They buy stocker cattle each year, starting in July and August. “Some of them go to wheat pastures and the rest of them stay here on grass.

“We run 5,000 to 7,000 cattle a year, with an average of 4,000 on the place at any one time. These are all sale barn cattle,” he says. With the planned grazing system, Emry, Deborah, and one hired helper are able to take care of it all. Having the cattle in one large herd concentrates the management efforts into a small area, making it easy for one person to do the pasture moves. And when supplement is fed, one person can feed all the cattle.

Infrastructure Investment Emry became interested in Holistic Management in the 1980s after one of his neighbors went to a grazing school and implemented some of these principles to improve pastures and stocking rate. Emry began using these methods on leased lands with his cow-calf herd and a few stockers, and then changed completely to stockers to have more flexibility. “On our ranch today we have 120 permanent paddocks, fenced with electric hard wire, and we divide each of those 3 to 5 ways with poly wire. The 120 days from March through June, we probably moved the cattle on average 4 times per day—sometimes 6 times per day and a minimum of twice a day,” says Emry. “Since 2011 we’ve been putting in a pipeline system for water. We’d been watering in dirt tanks that collect runoff from rainwater. Due to lack of rain in the current drought we put in the pipeline so we can pump from those dirt tanks into water troughs. Most of the cattle are now using water troughs,” he says. He also utilizes a mobile water trough, pump and generator. These are on a trailer and can be moved from one water hole to another. “This enables us to pump from a water source we couldn’t use, into a trough, and make it usable. This helps stretch the water supply. We’re watering 3,800 cattle right now out of one 24-foot trough,” he says. Deborah explains that the pipeline allows them to move the mobile trough to wherever they want the cattle to be. “Emry can move that trough anywhere in a paddock, in order to achieve new results on stocking density and pasture use,” she says. Deborah and Emry been on this ranch nearly 10 years and have changed a lot of things. “We’ve taken out miles and miles of permanent fence, to enable the cattle to get to the water that we had,” says Emry. “We still have some more fences to take out, but with our current

The mobile water trough that can handle 4,000 head of cattle.