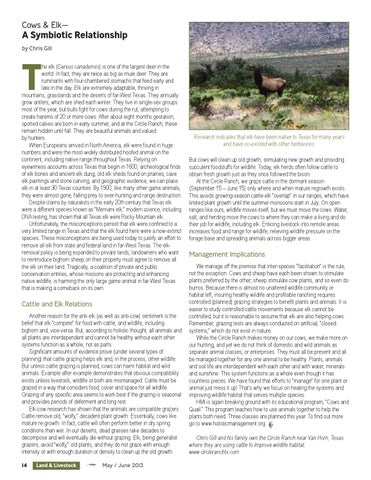 A Symbiotic Relationship by Chris Gill

he elk (Cervus canadensis) is one of the largest deer in the world. in fact, they are twice as big as mule deer. They are ruminants with four-chambered stomachs that feed early and late in the day. Elk are extremely adaptable, thriving in mountains, grasslands and the deserts of far-West Texas. They annually grow antlers, which are shed each winter. They live in single-sex groups most of the year, but bulls fight for cows during the rut, attempting to create harems of 20 or more cows. After about eight months gestation, spotted calves are born in early summer, and at the Circle Ranch, these remain hidden until fall. They are beautiful animals and valued by hunters. When Europeans arrived in north America, elk were found in huge numbers and were the most-widely distributed hoofed animal on the continent, including native range throughout Texas. Relying on eyewitness accounts across Texas that begin in 1600, archeological finds of elk bones and ancient elk dung, old elk sheds found on prairies, cave elk paintings and stone carving, and geographic evidence, we can place elk in at least 30 Texas counties. By 1900, like many other game animals, they were almost gone, falling prey to over-hunting and range destruction. despite claims by naturalists in the early 20th century that Texas elk were a different species known as “Merriami elk,” modern science, including dnA testing, has shown that all Texas elk were Rocky Mountain elk. Unfortunately, the misconceptions persist that elk were confined to a very limited range in Texas and that the elk found here were a now-extinct species. These misconceptions are being used today to justify an effort to remove all elk from state and federal land in far-West Texas. The elkremoval policy is being expanded to private lands; landowners who want to reintroduce bighorn sheep on their property must agree to remove all the elk on their land. Tragically, a coalition of private and public conservation entities, whose missions are protecting and enhancing native wildlife, is harming the only large game animal in far-West Texas that is making a comeback on its own.

Cattle and Elk Relations Another reason for the anti-elk (as well as anti-cow) sentiment is the belief that elk “compete” for food with cattle, and wildlife, including bighorn and, vice-versa. But, according to holistic thought, all animals and all plants are interdependent and cannot be healthy without each other: systems function as a whole, not as parts. Significant amounts of evidence prove (under several types of planning) that cattle grazing helps elk and, in the process, other wildlife. But unless cattle grazing is planned, cows can harm habitat and wild animals. Example after example demonstrates that obvious compatibility exists unless livestock, wildlife or both are mismanaged. Cattle must be grazed in a way that considers food, cover and space for all wildlife. Grazing of any specific area seems to work best if the grazing is seasonal and provides periods of deferment and long rest. Elk-cow research has shown that the animals are compatible grazers. Cattle remove old, “wolfy,” decadent plant growth. Essentially, cows like mature re-growth. in fact, cattle will often perform better in dry spring conditions than wet. in our deserts, dead grasses take decades to decompose and will eventually die without grazing. Elk, being generalist grazers, avoid “wolfy,” old plants, and they do not graze with enough intensity or with enough duration or density to clean up the old growth. 14

Research indicates that elk have been native to Texas for many years and have co-existed with other herbivores. But cows will clean up old growth, stimulating new growth and providing succulent foodstuffs for wildlife. Today, elk herds often follow cattle to obtain fresh growth just as they once followed the bison. At the Circle Ranch, we graze cattle in the dormant season (September 15 – June 15) only where and when mature regrowth exists. This avoids growing-season cattle-elk “overlap” in our ranges, which have limited plant growth until the summer monsoons start in July. On open ranges like ours, wildlife moves itself, but we must move the cows. Water, salt, and herding move the cows to where they can make a living and do their job for wildlife, including elk. Enticing livestock into remote areas increases food and range for wildlife, relieving wildlife pressure on the forage base and spreading animals across bigger areas.

Management Implications We manage off the premise that inter-species “facilitation” is the rule, not the exception. Cows and sheep have each been shown to stimulate plants preferred by the other; sheep stimulate cow plants, and so even do burros. Because there is almost no unaltered wildlife community or habitat left, insuring healthy wildlife and profitable ranching requires controlled (planned) grazing strategies to benefit plants and animals. it is easier to study controlled cattle movements because elk cannot be controlled, but it is reasonable to assume that elk are also helping cows. Remember, grazing tests are always conducted on artificial, “closedsystems,” which do not exist in nature. While the Circle Ranch makes money on our cows, we make more on our hunting, and yet we do not think of domestic and wild animals as separate animal classes, or enterprises. They must all be present and all be managed together for any one animal to be healthy. Plants, animals and soil life are interdependent with each other and with water, minerals and sunshine. This system functions as a whole even though it has countless pieces. We have found that efforts to “manage” for one plant or animal just mess it up! That’s why we focus on healing the systems and improving wildlife habitat that serves multiple species. HMi is again breaking ground with its educational program, “Cows and Quail.” This program teaches how to use animals together to help the plants both need. Three classes are planned this year. To find out more go to www.holisticmanagement.org Chris Gill and his family own the Circle Ranch near Van Horn, Texas where they are using cattle to improve wildlife habitat. www.circleranchtx.com