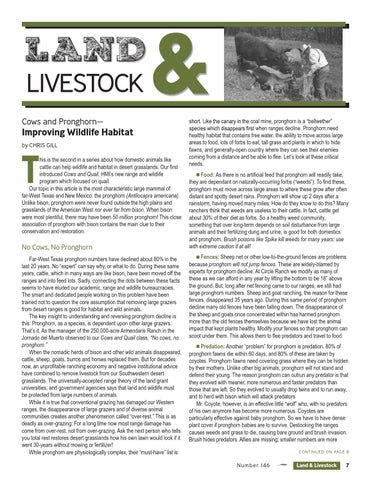 his is the second in a series about how domestic animals like cattle can help wildlife and habitat in desert grasslands. Our first introduced Cows and Quail, HMI’s new range and wildlife program which focused on quail. Our topic in this article is the most characteristic large mammal of far-West Texas and New Mexico: the pronghorn (Antilocapra americana). Unlike bison, pronghorn were never found outside the high plains and grasslands of the American West nor ever far from bison. When bison were most plentiful, there may have been 50 million pronghorn! This close association of pronghorn with bison contains the main clue to their conservation and restoration.

No Cows, No Pronghorn Far-West Texas pronghorn numbers have declined about 80% in the last 20 years. No “expert” can say why, or what to do. During these same years, cattle, which in many ways are like bison, have been moved off the ranges and into feed lots. Sadly, connecting the dots between these facts seems to have eluded our academic, range and wildlife bureaucracies. The smart and dedicated people working on this problem have been trained not to question the core assumption that removing large grazers from desert ranges is good for habitat and wild animals. The key insight to understanding and reversing pronghorn decline is this: Pronghorn, as a species, is dependent upon other large grazers. That’s it. As the manager of the 250,000-acre Armendaris Ranch in the Jornado del Muerto observed to our Cows and Quail class, “No cows, no pronghorn.” When the nomadic herds of bison and other wild animals disappeared, cattle, sheep, goats, burros and horses replaced them. But for decades now, an unprofitable ranching economy and negative institutional advice have combined to remove livestock from our Southwestern desert grasslands. The universally-accepted range theory of the land grant universities, and government agencies says that land and wildlife must be protected from large numbers of animals. While it is true that conventional grazing has damaged our Western ranges, the disappearance of large grazers and of diverse animal communities creates another phenomenon called “over-rest.” This is as deadly as over-grazing: For a long time now most range damage has come from over-rest, not from over-grazing. Ask the next person who tells you total rest restores desert grasslands how his own lawn would look if it went 30-years without mowing or fertilizer! While pronghorn are physiologically complex, their “must-have” list is

short. Like the canary in the coal mine, pronghorn is a “bellwether” species which disappears first when ranges decline. Pronghorn need healthy habitat that contains free water, the ability to move across large areas to food, lots of forbs to eat, tall grass and plants in which to hide fawns, and generally-open country where they can see their enemies coming from a distance and be able to flee. Let’s look at these critical needs. ■ Food: As there is no artificial feed that pronghorn will readily take, they are dependant on naturally-occurring forbs (“weeds”): To find these, pronghorn must move across large areas to where these grow after often distant and spotty desert rains. Pronghorn will show up 2 days after a rainstorm, having moved many miles: How do they know to do this? Many ranchers think that weeds are useless to their cattle. In fact, cattle get about 30% of their diet as forbs. So a healthy weed community, something that over long-term depends on soil disturbance from large animals and their fertilizing dung and urine, is good for both domestics and pronghorn. Brush poisons like Spike kill weeds for many years: use with extreme caution if at all! ■ Fences: Sheep net or other low-to-the-ground fences are problems because pronghorn will not jump fences. These are widely-blamed by experts for pronghorn decline. At Circle Ranch we modify as many of these as we can afford in any year by lifting the bottom to be 18” above the ground. But, long after net fencing came to our ranges, we still had large pronghorn numbers. Sheep and goat ranching, the reason for these fences, disappeared 35 years ago. During this same period of pronghorn decline many old fences have been falling down. The disappearance of the sheep and goats once concentrated within has harmed pronghorn more than the old fences themselves because we have lost the animal impact that kept plants healthy. Modify your fences so that pronghorn can scoot under them. This allows them to flee predators and travel to food. ■ Predation: Another “problem” for pronghorn is predation. 80% of pronghorn fawns die within 60 days, and 80% of these are taken by coyotes. Pronghorn fawns need covering grass where they can be hidden by their mothers. Unlike other big animals, pronghorn will not stand and defend their young. The reason pronghorn can outrun any predator is that they evolved with meaner, more numerous and faster predators than those that are left. So they evolved to usually drop twins and to run away, and to herd with bison which will attack predators Mr. Coyote, however, is an effective little “wolf” who, with no predators of his own anymore has become more numerous. Coyotes are particularly effective against baby pronghorn. So we have to have dense plant cover if pronghorn babies are to survive. Destocking the ranges causes weeds and grass to die, causing bare ground and brush invasion. Brush hides predators. Allies are missing; smaller numbers are more CONTINUED ON PAGE 8