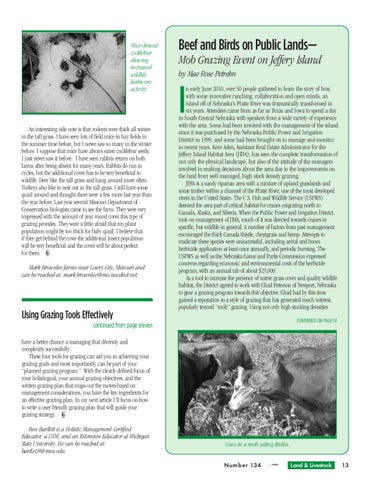 An interesting side note is that rodents were thick all winter in the tall grass. I have seen lots of field mice in hay fields in the summer time before, but I never saw so many in the winter before. I suppose that mice have always eaten cocklebur seeds; I just never saw it before. I have seen rabbits return on both farms after being absent for many years. Rabbits do run in cycles, but the additional cover has to be very beneficial to wildlife. Deer like the tall grass and hang around more often. Turkeys also like to nest out in the tall grass. I still have some quail around and thought there were a few more last year than the year before. Last year several Missouri Department of Conservation biologists came to see the farm. They were very impressed with the amount of year round cover this type of grazing provides. They were a little afraid that my plant population might be too thick for baby quail. I believe that if they get behind the cows the additional insect population will be very beneficial and the cover will be about perfect for them. Mark Brownlee farms near Lowry City, Missouri and can be reached at: mark.brownlee@mo.nacdnet.net.

n early June 2010, over 50 people gathered to learn the story of how, with some innovative ranching, collaboration and open minds, an island off of Nebraska’s Platte River was dramatically transformed in six years. Attendees came from as far as Texas and Iowa to spend a day in South Central Nebraska with speakers from a wide variety of experience with the area. Some had been involved with the management of the island since it was purchased by the Nebraska Public Power and Irrigation District in 1999, and some had been brought on to manage and monitor in recent years. Kent Aden, Assistant Real Estate Administrator for the Jeffery Island Habitat Area (JIHA), has seen the complete transformation of not only the physical landscape, but also of the attitude of the managers involved in making decisions about the area due to the improvements on the land from well managed, high stock density grazing. JIHA is a sandy riparian area with a mixture of upland grasslands and some timber within a channel of the Platte River, one of the most developed rivers in the United States. The U.S. Fish and Wildlife Service (USFWS) deemed the area part of critical habitat for cranes migrating north to Canada, Alaska, and Siberia. When the Public Power and Irrigation District took on management of JIHA, much of it was directed towards cranes in specific, but wildlife in general. A number of factors from past management encouraged the thick Canada thistle, cheatgrass and hemp. Attempts to eradicate these species were unsuccessful, including aerial and boom herbicide application at least once annually, and periodic burning. The USFWS as well as the Nebraska Game and Parks Commission expressed concerns regarding economic and environmental costs of the herbicide program, with an annual tab of about $25,000. As a tool to increase the presence of native grass cover and quality wildlife habitat, the District agreed to work with Chad Peterson of Newport, Nebraska to gear a grazing program towards this objective. Chad had by this time gained a reputation in a style of grazing that has generated much interest, popularly termed “mob” grazing. Using not only high stocking densities

continued from page eleven have a better chance a managing that diversity and complexity successfully. These four tools for grazing can aid you in achieving your grazing goals and most importantly, can be part of your “planned grazing program.” With the clearly defined focus of your holisticgoal, your annual grazing objectives, and the written grazing plan that maps out the moves based on management considerations, you have the key ingredients for an effective grazing plan. In my next article I’ll focus on how to write a user friendly grazing plan that will guide your grazing strategy. Ben Bartlett is a Holistic Management Certified Educator, a DVM, and an Extension Educator at Michigan State University. He can be reached at: bartle18@msu.edu.

INSIDE THIS ISSUE LAND and LIVESTOCK FEATURE STORIES Sallie Calhoun, owner of Paicines Ranch, tags oak samplings so they can be identified f...

INSIDE THIS ISSUE LAND and LIVESTOCK FEATURE STORIES Sallie Calhoun, owner of Paicines Ranch, tags oak samplings so they can be identified f...