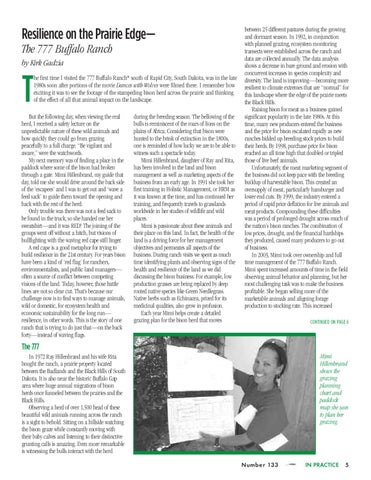 he first time I visited the 777 Buffalo Ranch* south of Rapid City, South Dakota, was in the late 1980s soon after portions of the movie Dances with Wolves were filmed there. I remember how exciting it was to see the footage of the stampeding bison herd across the prairie and thinking of the effect of all that animal impact on the landscape.

But the following day, when viewing the real herd, I received a safety lecture on the unpredictable nature of these wild animals and how quickly they could go from grazing peacefully to a full charge. “Be vigilant and aware,” were the watchwords. My next memory was of finding a place in the paddock where some of the bison had broken through a gate. Mimi Hillenbrand, my guide that day, told me she would drive around the back side of the ‘escapees’ and I was to get out and ‘wave a feed sack’ to guide them toward the opening and back with the rest of the herd. Only trouble was there was not a feed sack to be found in the truck, so she handed me her sweatshirt—and it was RED! The joining of the groups went off without a hitch, but visions of bullfighting with the waving red cape still linger. A red cape is a good metaphor for trying to build resilience in the 21st century. For years bison have been a kind of ‘red flag’ for ranchers, environmentalists, and public land managers— often a source of conflict between competing visions of the land. Today, however, those battle lines are not so clear cut. That’s because our challenge now is to find ways to manage animals, wild or domestic, for ecosystem health and economic sustainability for the long run— resilience, in other words. This is the story of one ranch that is trying to do just that—on the back forty—instead of waving flags.

during the breeding season. The bellowing of the bulls is reminiscent of the roars of lions on the plains of Africa. Considering that bison were hunted to the brink of extinction in the 1800s, one is reminded of how lucky we are to be able to witness such a spectacle today. Mimi Hillenbrand, daughter of Ray and Rita, has been involved in the land and bison management as well as marketing aspects of the business from an early age. In 1991 she took her first training in Holistic Management, or HRM as it was known at the time, and has continued her training, and frequently travels to grasslands worldwide in her studies of wildlife and wild places. Mimi is passionate about these animals and their place on this land. In fact, the health of the land is a driving force for her management objectives and permeates all aspects of the business. During ranch visits we spent as much time identifying plants and observing signs of the health and resilience of the land as we did discussing the bison business. For example, low production grasses are being replaced by deep rooted native species like Green Needlegrass. Native herbs such as Echinacea, prized for its medicinal qualities, also grow in profusion. Each year Mimi helps create a detailed grazing plan for the bison herd that moves

between 25 different pastures during the growing and dormant season. In 1992, in conjunction with planned grazing, ecosystem monitoring transects were established across the ranch and data are collected annually. The data analysis shows a decrease in bare ground and erosion with concurrent increases in species complexity and diversity. The land is improving—becoming more resilient to climate extremes that are “normal” for this landscape where the edge of the prairie meets the Black Hills. Raising bison for meat as a business gained significant popularity in the late 1980s. At this time, many new producers entered the business and the price for bison escalated rapidly as new ranches bidded up breeding stock prices to build their herds. By 1998, purchase price for bison reached an all time high that doubled or tripled those of live beef animals. Unfortunately, the meat marketing segment of the business did not keep pace with the breeding buildup of harvestable bison. This created an oversupply of meat, particularly hamburger and lower end cuts. By 1999, the industry entered a period of rapid price deflation for live animals and meat products. Compounding these difficulties was a period of prolonged drought across much of the nation’s bison ranches. The combination of low prices, drought, and the financial hardships they produced, caused many producers to go out of business. In 2003, Mimi took over ownership and full time management of the 777 Buffalo Ranch. Mimi spent increased amounts of time in the field observing animal behavior and planning, but her most challenging task was to make the business profitable. She began selling more of the marketable animals and aligning forage production to stocking rate. This increased CONTINUED ON PAGE 6

The 777 Mimi Hillenbrand shows the grazing planning chart and paddock map she uses to plan her grazing.

In 1972 Ray Hillenbrand and his wife Rita bought the ranch, a prairie property located between the Badlands and the Black Hills of South Dakota. It is also near the historic Buffalo Gap area where huge annual migrations of bison herds once funneled between the prairies and the Black Hills. Observing a herd of over 1,500 head of these beautiful wild animals running across the ranch is a sight to behold. Sitting on a hillside watching the bison graze while constantly moving with their baby calves and listening to their distinctive grunting calls is amazing. Even more remarkable is witnessing the bulls interact with the herd Number 133

INSIDE THIS ISSUE LAND and LIVESTOCK FEATURE STORIES With planned grazing the 777 Buffalo Ranch has been able to allow for adequate recovery...

INSIDE THIS ISSUE LAND and LIVESTOCK FEATURE STORIES With planned grazing the 777 Buffalo Ranch has been able to allow for adequate recovery...