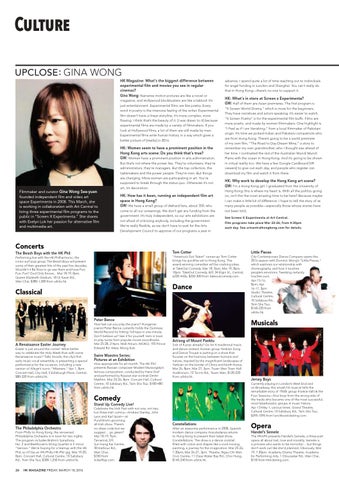 Filmmaker and curator Gina Wong See-yuen founded independent film and video art space Experimenta in 2008. This March, she is working in collaboration with Art Central to bring three experimental film programs to the public in “Screen X Experimenta.” She shares with Evelyn Lok her passion for alternative film and multimedia art.

HK: Women seem to have a prominent position in the Hong Kong arts scene: Do you think that’s true? GW: Women have a prominent position in arts administration. But that’s not where the power lies. They’re volunteers, they’re administrators, they’re managers. But the top collectors, the tastemakers and the power people: They’re men. But things are changing. More women are participating in art. You’re supposed to break through the status quo. Otherwise it’s not art, it’s decoration. HK: How has it been, running an independent film art space in Hong Kong? GW: We have a small group of diehard fans, about 350, who come to all our screenings. We don’t get any funding from the government. It’s truly independent, so our arts exhibitions are not afraid of criticizing anybody, including the government. We’re really flexible, as we don’t have to wait for the Arts Development Council to approve of our programs a year in

advance. I spend quite a lot of time reaching out to individuals for angel funding in London and Shanghai. You can’t really do that in Hong Kong—there’s no one to support it. HK: What’s in store at Screen x Experimenta? GW: Half of them are Asian premieres. The first program is “X Screen World Drama,” which is more for the beginners. They have narratives and actors speaking. It’s easier to watch. “X Screen Poetry” is for the experimental film buffs. Films are more poetic, and made by women filmmakers. One highlight is “I Feel as if I am Vanishing,” from a local filmmaker of Pakistani origin. It’s time we picked Indian and Pakistani compatriots who are from Hong Kong. There’s going to be a world premiere of my own film, “The Road to Day Dream Mine,” a story to remember my own grandmother, who I thought was ahead of her time. I contrasted the red of the Australian Mundi Mundi Plains with the ocean in Hong Kong. And it’s going to be shown in virtual reality too. We have a few Google Cardboard [VR viewers] to give out each day, and people who register can download my film and watch it from there. HK: Why work to develop the Hong Kong art scene? GW: I’m a Hong Kong girl. I graduated from the University of Hong Kong, this is where my heart is. With all the politics going on, isn’t this the most amazing time to be here? Because maybe I can make a little bit of difference. I hope to tell the story of as many people as possible—especially those whose stories have not been told. See Screen X Experimenta at Art Central. Film programs take place Mar 22-26, from 4:30pm each day. See artcentralhongkong.com for details.

The Beach Boys with the HK Phil

Performing live with the HK Philharmonic, the iconic surf-pop group The Beach Boys will present some of their greatest hits of the past five decades. Wouldn’t it Be Nice to go see them and have Fun, Fun, Fun? God Only Knows... Mar 18-19, 8pm. Queen Elizabeth Stadium, 18 Oi Kwan Rd., Wan Chai, $380-1,580 from urbtix.hk.

Easter is just around the corner! What better way to celebrate the Holy Week than with some Renaissance music? Tallis Vocalis, the city’s first early music vocal ensemble, is presenting a special performance for the occasion, including a new version of Allegri’s iconic “Miserere.” Apr 1, 8pm. Concert Hall, City Hall, 5 Edinburgh Place, Central, $80-320 from urbtix.hk.

Sick of K-pop already? Go for K-traditional music and dance instead. Korean group Yanbian Song and Dance Troupe is putting on a show that focuses on the harmony between humans and nature, inspired by the magnificent landscapes of Yanbian on the border of China and North Korea. Mar 26, 8pm; Mar 27, 3pm. Tsuen Wan Town Hall Auditorium, 72 Tai Ho Rd., Tsuen Wan, $120-220 from urbtix.hk.

From Philly to Hong Kong, the renowned Philadelphia Orchestra is in town for two nights. The program includes Brahm’s Symphony No. 2 and Beethoven’s String Quartet in F minor “Serioso.” We’re hoping for a teamup with the HK Phil, so it’ll be an HK-Philly-HK-Phil gig. Mar 19-20, 8pm. Concert Hall, Cultural Centre, 10 Salisbury Rd., Tsim Sha Tsui, $300-1,250 from urbtix.hk. 26

Currently playing in London’s West End and on Broadway, this smash hit musical tells the remarkable story of 1960s group Frankie Valli & the Four Seasons—four boys from the wrong side of the tracks who became one of the most successful, most falsettotastic groups in music history. Apr 13-May 1, various times. Grand Theatre, Cultural Centre, 10 Salisbury Rd., Tsim Sha Tsui, $395-1095 from lunchboxticketing.com.

The HKAPA presents Handel’s Semele, a three-part opera all about lust, love and morality. Semele is a princess who wants to be immortal… but things don’t work out like she’d planned. Obviously. Mar 19, 7:30pm. Academy Drama Theatre, Academy for Performing Arts, 1 Gloucester Rd., Wan Chai, $150 from hkticketing.com. Draw Hong Kong - How our artists see the city

Draw Hong Kong - How our artists see the city