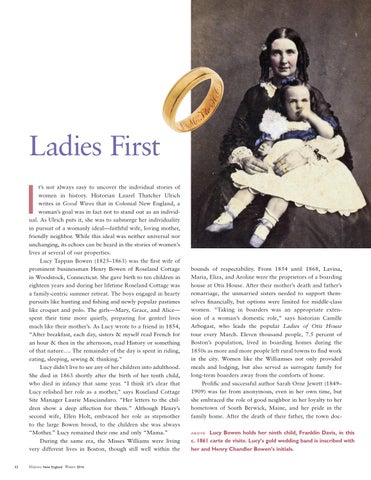 t’s not always easy to uncover the individual stories of women in history. Historian Laurel Thatcher Ulrich writes in Good Wives that in Colonial New England, a woman’s goal was in fact not to stand out as an individual. As Ulrich puts it, she was to submerge her individuality in pursuit of a womanly ideal—faithful wife, loving mother, friendly neighbor. While this ideal was neither universal nor unchanging, its echoes can be heard in the stories of women’s lives at several of our properties. Lucy Tappan Bowen (1825–1863) was the first wife of prominent businessman Henry Bowen of Roseland Cottage in Woodstock, Connecticut. She gave birth to ten children in eighteen years and during her lifetime Roseland Cottage was a family-centric summer retreat. The boys engaged in hearty pursuits like hunting and fishing and newly popular pastimes like croquet and polo. The girls—Mary, Grace, and Alice— spent their time more quietly, preparing for genteel lives much like their mother’s. As Lucy wrote to a friend in 1854, “After breakfast, each day, sisters & myself read French for an hour & then in the afternoon, read History or something of that nature…. The remainder of the day is spent in riding, eating, sleeping, sewing & thinking.” Lucy didn’t live to see any of her children into adulthood. She died in 1863 shortly after the birth of her tenth child, who died in infancy that same year. “I think it’s clear that Lucy relished her role as a mother,” says Roseland Cottage Site Manager Laurie Masciandaro. “Her letters to the children show a deep affection for them.” Although Henry’s second wife, Ellen Holt, embraced her role as stepmother to the large Bowen brood, to the children she was always “Mother.” Lucy remained their one and only “Mama.” During the same era, the Misses Williams were living very different lives in Boston, though still well within the

bounds of respectability. From 1854 until 1868, Lavina, Maria, Eliza, and Aroline were the proprietors of a boarding house at Otis House. After their mother’s death and father’s remarriage, the unmarried sisters needed to support themselves financially, but options were limited for middle-class women. “Taking in boarders was an appropriate extension of a woman’s domestic role,” says historian Camille Arbogast, who leads the popular Ladies of Otis House tour every March. Eleven thousand people, 7.5 percent of Boston’s population, lived in boarding homes during the 1850s as more and more people left rural towns to find work in the city. Women like the Williamses not only provided meals and lodging, but also served as surrogate family for long-term boarders away from the comforts of home. Prolific and successful author Sarah Orne Jewett (1849– 1909) was far from anonymous, even in her own time, but she embraced the role of good neighbor in her loyalty to her hometown of South Berwick, Maine, and her pride in the family home. After the death of their father, the town docLucy Bowen holds her ninth child, Franklin Davis, in this c. 1861 carte de visite. Lucy’s gold wedding band is inscribed with her and Henry Chandler Bowen’s initials. ABOVE 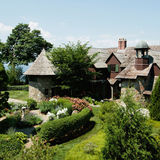 Our one hundredth easement property in Little Boar's Head, New Hampshire, discoveries at the Eustis Estate in Milton, Mass., a day in the li...

Our one hundredth easement property in Little Boar's Head, New Hampshire, discoveries at the Eustis Estate in Milton, Mass., a day in the li...