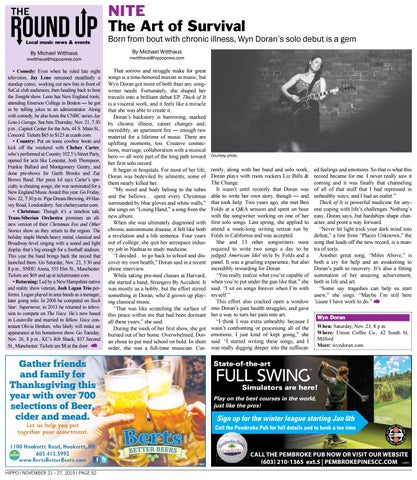 Born from bout with chronic illness, Wyn Doran’s solo debut is a gem By Michael Witthaus

• Comedy: Even when he ruled late night television, Jay Leno remained steadfastly a standup comic, working out new bits in front of SoCal club audiences, then heading back to host the Tonight show. Leno has New England roots, attending Emerson College in Boston — he got in by telling jokes to an administrator. Along with comedy, he also hosts the CNBC series Jay Leno’s Garage. See him Thursday, Nov. 21, 7:30 p.m., Capitol Center for the Arts, 44 S. Main St., Concord. Tickets $65 to $125 at ccanh.com. • Country: Put on some cowboy boots and kick off the weekend with Chelsey Carter, who’s performed at Country 102.5’s Street Party, opened for acts like Lonestar, Josh Thompson, Frankie Ballard and Montgomery Gentry, and done pre-shows for Garth Brooks and Zac Brown Band. Her press kit says Carter’s specialty is cheating songs; she was nominated for a New England Music Award this year. Go Friday, Nov. 22, 7:30 p.m. Pipe Dream Brewing, 49 Harvey Road, Londonderry. See chelseycarter.com. • Christmas: Though it’s a timeless tale, Trans-Siberian Orchestra promises an allnew version of their Christmas Eve and Other Stories show as they return to the region. The holiday staple blends heavy metal, classical and Broadway-level singing with a sound and light display that’s big enough for a football stadium. This year the band brings back the record that launched them. Go Saturday, Nov. 23, 3:30 and 8 p.m., SNHU Arena, 555 Elm St., Manchester. Tickets are $69 and up at ticketmaster.com. • Returning: Led by a New Hampshire native and reality show veteran, Josh Logan Trio performs. Logan played in area bands as a teenager, later going solo. In 2006 he competed on Rock Star: Supernova; in 2013 he returned to television to compete on The Voice. He’s now based in Louisville and married to fellow Voice contestant Olivia Henken, who likely will make an appearance at his hometown show. Go Tuesday, Nov. 26, 8 p.m., KC’s Rib Shack, 837 Second St., Manchester. Tickets are $8 at the door.

That sorrow and struggle make for great songs is a time-honored maxim in music, but Wyn Doran got more of both than any songwriter needs. Fortunately, she shaped her travails into a brilliant debut EP. Thick of It is a visceral work, and it feels like a miracle that she was able to create it. Doran’s backstory is harrowing, marked by chronic illness, career changes and, incredibly, an apartment fire — enough raw material for a lifetime of music. There are uplifting moments, too. Creative connections, marriage, collaboration with a musical hero — all were part of the long path toward her first solo record. It began in hospitals. For most of her life, Doran was bedeviled by ailments; some of them nearly killed her. “My mind and body belong to the tubes and the bellows… spent every Christmas surrounded by blue gloves and white walls,” she sings on “Losing Hand,” a song from the new album. When she was ultimately diagnosed with chronic autoimmune disease, it felt like both a revelation and a life sentence. Four years out of college, she quit her aerospace industry job in Nashua to study medicine. “I decided... to go back to school and discover my own health,” Doran said in a recent phone interview. While taking pre-med classes at Harvard, she started a band, Strangers By Accident. It was mostly as a hobby, but the effort stirred something in Doran, who’d grown up playing classical music. “That was like scratching the surface of this peace within me that had been dormant all these years,” she said. During the week of her first show, she got burned out of her home. Overwhelmed, Doran chose to put med school on hold. In short order, she was a full-time musician. Cur-

rently, along with her band and solo work, Doran plays with roots rockers Liz Bills &amp; The Change. It wasn’t until recently that Doran was able to write her own story, though — and that took help. Two years ago, she met Ben Folds at a Q&amp;A session and spent an hour with the songwriter working on one of her first solo songs. Last spring, she applied to attend a week-long writing retreat run by Folds in California and was accepted. She and 13 other songwriters were required to write two songs a day to be judged American Idol style by Folds and a panel. It was a grueling experience, but also incredibly rewarding for Doran. “You really realize what you’re capable of when you’re put under the gun like that,” she said. “I sit on songs forever when I’m with myself.” This effort also cracked open a window into Doran’s past health struggles, and gave her a way to turn her pain into art. “I think I was extra unhealthy because I wasn’t confronting or processing all of the emotions; I just kind of kept going,” she said. “I started writing these songs, and I was really digging deeper into the suffocat-

ed feelings and emotions. So that is what this record became for me. I never really saw it coming and it was finally that channeling of all of that stuff that I had repressed in unhealthy ways, and I had an outlet.” Thick of It is powerful medicine for anyone coping with life’s challenges. Nothing’s easy, Doran says, but hardships shape character, and point a way forward. “Never let light trick your dark mind into defeat,” a line from “Places Unknown,” the song that leads off the new record, is a mantra of sorts. Another great song, “Miles Above,” is both a cry for help and an awakening to Doran’s path to recovery. It’s also a fitting summation of her amazing achievement, both in life and art. “Some say tragedies can help us start anew,” she sings. “Maybe I’m still here ’cause I have work to do.” Wyn Doran When: Saturday, Nov. 23, 8 p.m. Where: Union Coffee Co., 42 South St, Milford More: wyndoran.com

State-of-the-art Simulators are here! Play on the best courses in the world, just like the pros!

on the cover 12 all about the bird Sure, you need your sweet potatoes, your green bean casserole and your pumpkin pie for Thanksgiving, but the star of the meal — and perhaps the biggest stressor for the cook — is the turkey. Local chefs share their tips for making the tastiest turkey, from where you buy the bird to how you cook it. Also on the cover, another November weekend, another slew of craft fairs happening in southern New Hampshire, p. 30. Winter farmers markets are getting underway too, p. 36. And find the perfect beer to accompany your Thanksgiving meal, p. 42. 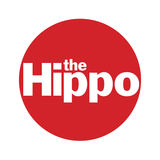