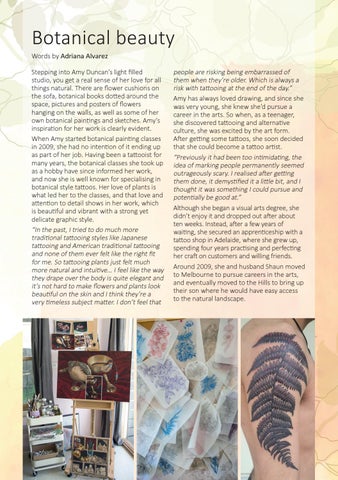 Botanical beauty Words by Adriana Alvarez Stepping into Amy Duncan’s light filled studio, you get a real sense of her love for all things natural. There are flower cushions on the sofa, botanical books dotted around the space, pictures and posters of flowers hanging on the walls, as well as some of her own botanical paintings and sketches. Amy’s inspiration for her work is clearly evident. When Amy started botanical painting classes in 2009, she had no intention of it ending up as part of her job. Having been a tattooist for many years, the botanical classes she took up as a hobby have since informed her work, and now she is well known for specialising in botanical style tattoos. Her love of plants is what led her to the classes, and that love and attention to detail shows in her work, which is beautiful and vibrant with a strong yet delicate graphic style. “In the past, I tried to do much more traditional tattooing styles like Japanese tattooing and American traditional tattooing and none of them ever felt like the right fit for me. So tattooing plants just felt much more natural and intuitive… I feel like the way they drape over the body is quite elegant and it’s not hard to make flowers and plants look beautiful on the skin and I think they’re a very timeless subject matter. I don’t feel that

people are risking being embarrassed of them when they’re older. Which is always a risk with tattooing at the end of the day.” Amy has always loved drawing, and since she was very young, she knew she’d pursue a career in the arts. So when, as a teenager, she discovered tattooing and alternative culture, she was excited by the art form. After getting some tattoos, she soon decided that she could become a tattoo artist. “Previously it had been too intimidating, the idea of marking people permanently seemed outrageously scary. I realised after getting them done, it demystified it a little bit, and I thought it was something I could pursue and potentially be good at.” Although she began a visual arts degree, she didn’t enjoy it and dropped out after about ten weeks. Instead, after a few years of waiting, she secured an apprenticeship with a tattoo shop in Adelaide, where she grew up, spending four years practising and perfecting her craft on customers and willing friends. Around 2009, she and husband Shaun moved to Melbourne to pursue careers in the arts, and eventually moved to the Hills to bring up their son where he would have easy access to the natural landscape.

Summer 2016-2017. A Maga'zine' about all the interesting people and things happening in the beautiful Dandenong Ranges. 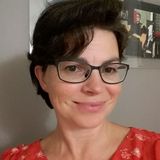