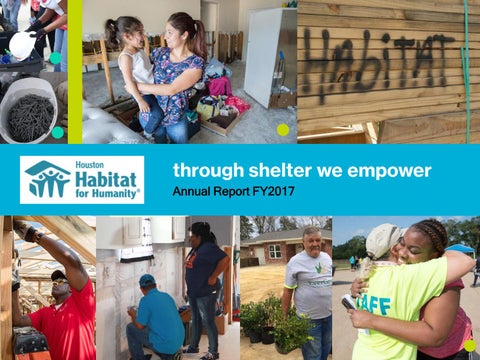 2017 was a year of change for Houston Habitat for Humanity as well as the entire Greater Houston area. Houston Habitat kicked off the year by planning and completing SuperBUILD 51 in honor of our city hosting Super Bowl 51 in February 2017.

Little did we know that 7 months later over 51 inches of water would flood our city by Hurricane Harvey.

By the end of 2017, Houston Habitat mucked and gutted 199 homes. Of those homes 136 passed mold inspection and were mold certified. We completed 64 full home repairs.

We did this by doing what we do best, asking for volunteers and using the financial resources from so many who believe in our mission. Over 1,425 volunteers volunteered 7,429 hours to help homeowners and families start to clean up their lives through repair and new homeownership. It was amazing to see wave after wave of volunteers pulling out wet sheetrock, destroyed furniture and turn around to hug a homeowner and then go back to this very hard work.

Houston Habitat received donations from over 1,200 donors from 47 states and 2 countries (Canada and England). Corporations that knew our good reliable work stepped up and funded us in September to get houses repaired.

We received over 11,000 sheets of sheetrock from the Interior Exterior Building Supply and the American Gypsum Association in New Orleans, and 72 pallets of studs from the Resolute Forest Products in Canada. The world was reaching out to help Houston recover. We had amazing donations that transformed our mission of homes community and hope to include home repair for those that need it the most but have the least resources.

When 2017 ended, we set our sights on the long term recovery for our city and our neighbors. Houston Habitatâ&amp;#x20AC;&amp;#x2122;s Disaster Home Repair focused on the most vulnerable homeowners with the least resources â&amp;#x20AC;&amp;#x201C; the seniors, disabled and families with small children. With your continued support, we will push ahead knowing that everyone needs a decent place to live even after disasters.

A 65 year old homeowner from Houstonâ&amp;#x20AC;&amp;#x2122;s Fifth Ward, was diagnosed with congestive heart failure in 2006. Since then, her life revolved sustaining a normal oxygen level with her need-to-have oxygen tank around while pursuing ownership of her home of 30 years. Upon paying her home off completely, Hurricane Harvey hit. Flood waters reached levels just high enough inside her house to ruin her flooring. When emergency disaster organizations arrived to help muck &amp; gut, upon protocol, not only did they remove all her flooring, but her interior walls as well. We believe removing the walls was done on impulse, as no evidence of water levels were identified within, and she had hardwood panels and no insulation. Because of this careless impulse to remove, it set the homeowner back further on restoring the home to the way it was before Harvey. Now, her entire interior home has been restored; Houston Habitat repaired all her broken and improperly installed plumbing, repaired foundation, and replaced her roof. To fully complete her restoration, we returned to re-wire her electric in order to gift her with brand new appliances donated by Samsung.

Our homeownerâ&amp;#x20AC;&amp;#x2122;s kindness and willingness to work with the available plans helped moved the process, and we hope with all our hearts she will be comfortable in her home for years to come. Hurricane Harvey may have devastated homes and properties, but with help from agencies partnering together, restoring homes, community and hope has become a reality.

It was our 30th Anniversary In the midst, there was a special luncheon to prepare for. We celebrated 30 years of service to the Houston community building homes â&amp;#x20AC;&amp;#x201C; instilling strength, stability and self-reliance for families and individuals who may not otherwise experience the rewards of purchasing their own home. Add to that our efforts to keep homeowners in their homes, and the 30th Anniversary Luncheon became a very important time to acknowledge once again our donors, volunteers, and homeowners who weathered the storm.

In 2017, Houston Habitat for Humanity contributed:

We also acknowledge with sincere appreciation the gifts of those donors who wish to remain anonymous.

Aramco Services Company has deep roots in Houston and is well known for giving back to the community. Aramco, a partner of Houston Habitat since 2005, provided significant funding for homes for Katrina evacuees in our Greensbrook neighborhood and employeevolunteers to help build them. Thereafter, Aramco continued to sponsor and help build homes, most recently in our Harrel Park neighborhood. Responding to the devastation wrought by Hurricane Harvey, Aramco quickly made significant contributions to the Mayor’s and County Judge’s Hurricane Harvey Relief Fund and other community organizations responding to immediate needs. Upon learning that all of the homes in Greensbrook and Harrel Park were flooded by Hurricane Harvey, they joined Houston Habitat in mucking and gutting these very homes, just days after the flood waters receded and even while some were dealing with their own flood damage. Moved by Houston Habitat homeowners’ determination to rebuild their homes in the face of seemingly unsurmountable challenges, Aramco provided the resources for the restoration of every single Houston Habitat home in Greensbrook and Harrel Park – all 176 of them. Aramco’s gift empowered Houston Habitat to focus on repairing these homes as quickly as possible. Their generosity allowed Houston Habitat to meet homeowners’ individual needs by offering them choices from a menu of services including mucking and gutting, home repair, mold assessment (and remediation if necessary), appliances and HVAC. Aramco’s gift lifted a heavy burden from our homeowners during a time when the future looked bleak. It helped them get back home and establish their “new” normal. Thanks to Aramco, Greensbrook and Harrel Park are now thriving again. Scenes of front yards overflowing with piles of debris have been replaced by children playing and riding bikes and neighbors engaged in lively conversation. Undoubtedly, Aramco’s gift did more than restore possessions. Aramco’s gift restored hope – hope for bright futures and better tomorrows -- the greatest gift of all. As we continue to help other homeowners recover following the devastation of Hurricane Harvey, support from our partners is critical in rebuilding strong communities. We are pleased to recognize Aramco’s exemplary contribution with the Houston Habitat Harvey Hero Award. Houston Habitat and our Harrel Park and Greensbrook homeowners will be eternally grateful to Aramco for their transformational gift.

The Edward and Helen Oppenheimer Foundation 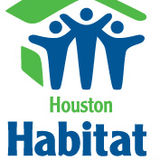