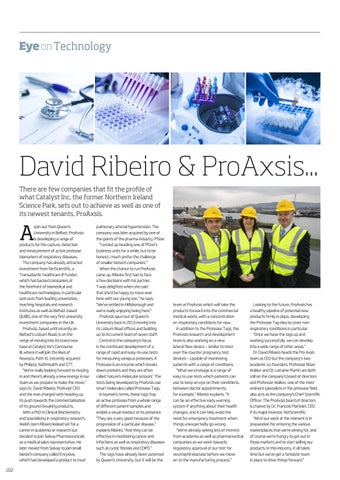 David Ribeiro & ProAxsis... There are few companies that fit the profile of what Catalyst Inc, the former Northern Ireland Science Park, sets out to achieve as well as one of its newest tenants, ProAxsis.

spin out from Queen’s University in Belfast, ProAxsis is developing a range of products for the capture, detection and measurement of active protease biomarkers of respiratory diseases. The company has already attracted investment from NetScientific, a Transatlantic healthcare IP funder, which has backed companies at the forefront of biomedical and healthcare technologies, in particular spin outs from leading universities, teaching hospitals and research institutes as well as Belfast-based QUBIS, one of the very first university investment companies in the UK. ProAxsis, based until recently on Belfast’s Lisburn Road, is on the verge of moving into its brand new base at Catalyst Inc’s Concourse III, where it will join the likes of Novosco, Path XL (recently acquired by Philips), NathHealth and GTT. “We’re really looking forward to moving in and there’s already a new energy in our team as we prepare to make the move,” says Dr. David Ribeiro, ProAxsis’ CEO and the man charged with heading up its push towards the commercialisation of its ground-breaking products. With a PhD in Clinical Biochemistry and specialising in respiratory research, Welsh-born Ribeiro looked set for a career in academia or research but decided to join Solvay Pharmaceuticals as a medical sales representative. He later moved from Solvay to join small biotech company called Encysive, which had developed a product to treat

pulmonary arterial hypertension. The company was later acquired by one of the giants of the pharma industry, Pfizer. “I ended up heading one of Pfizer’s business units for a while, but to be honest, I much prefer the challenge of smaller biotech companies.” When the chance to run ProAxsis came up, Ribeiro first had to face a few decisions with his partner. “I was delighted when she said that she’d be happy to move over here with our young son,” he says. “We’ve settled in Hillsborough and we’re really enjoying being here.” ProAxsis spun out of Queen’s University back in 2013 moving into its Lisburn Road offices and building up to its current team of seven staff. Central to the company’s focus is the continued development of a range of rapid and easy-to-use tests for measuring variopus proteases. A Protease is an enzyme which breaks down proteins and they are often called ‘nature’s molecular scissors’. The tests being developed by ProAxsis use smart molecules called Protease Tags. In layman’s terms, these tags trap an active protease from a whole range of different patient samples and enable a visual readout of its presence. “They are a very good measure of the progression of a particular disease,” explains Ribeiro. “And they can be effective in monitoring cancer and infections as well as respiratory diseases such as cystic fibrosis and COPD.” The tags have already been patented by Queen’s University, but it will be the

team at ProAxsis which will take the products forward into the commercial medical world, with a concentration on respiratory conditions for now. In addition to the Protease Tags, the ProAxsis research and development team is also working on a new lateral flow device – similar to most over the counter pregnancy test devices – capable of monitoring patients with a range of conditions. “What we envisage is a range of easy to use tests which patients can use to keep an eye on their conditions, between doctor appointments, for example,” Ribeiro explains. “It can be an effective early warning system if anything about their health changes, and it can help avoid the need for emergency treatment when things unexpectedly go wrong. “We’re already seeing lots of interest from academia as well as pharmaceutical companies as we work towards regulatory approval of our test for neutrophil elastase before we move on to the manufacturing process.”

Looking to the future, ProAxsis has a healthy pipeline of potential new products firmly in place, developing the Protease Tag idea to cover nonrespiratory conditions in particular. “Once we have the tags up and working successfully, we can develop into a wide range of other areas.” Dr. David Ribeiro heads the Pro Axsis team as CEO but the company’s two academic co-founders, Professor Brian Walker and Dr. Lorraine Martin are both still on the company’s board of directors and Professor Walker, one of the most eminent specialists in the protease field, also acts as the company’s Chief Scientific Officer. The ProAxsis board of directors is chaired by Dr. Francois Martelet, CEO if its major investor, NetScientific. “All of our work at the moment is in preparation for entering the various marketplaces that we’re aiming for, and of course we’re hungry to get out in those markets and to start selling our products. In this industry, it all takes time but we’ve got a fantastic team in place to drive things forward.” 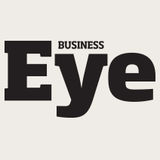