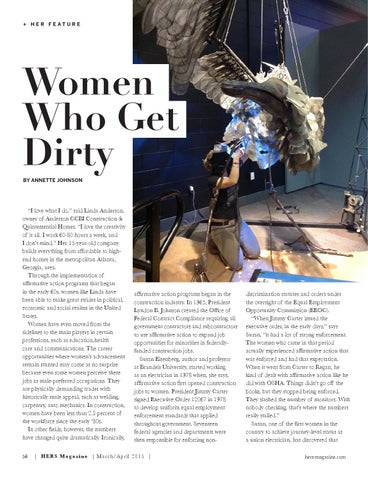 Women Who Get Dirty BY ANNETTE JOHNSON

“I love what I do,” said Linda Anderson, owner of Anderson CCBI Construction &amp; Quintessential Homes. “I love the creativity of it all. I work 60-80 hours a week, and I don’t mind.” Her 15-year-old company builds everything from affordable to highend homes in the metropolitan Atlanta, Georgia, area. Through the implementation of affirmative action programs that began in the early 60s, women like Linda have been able to make great strides in political, economic and social realms in the United States. Women have even moved from the sidelines to the main players in certain professions, such as education,health care and communications. The career opportunities where women’s advancement remain stunted may come as no surprise because even some women perceive these jobs as male-preferred occupations. They are physically demanding trades with historically male appeal, such as welding, carpentry, auto mechanics. In construction, women have been less than 2.3 percent of the workforce since the early ‘80s. In other fields, however, the numbers have changed quite dramatically. Ironically, 56

affirmative action programs began in the construction industry. In 1965, President Lyndon B. Johnson created the Office of Federal Contract Compliance requiring all government contractors and subcontractors to use affirmative action to expand job opportunities for minorities in federallyfunded construction jobs. Susan Eisenberg, author and professor at Brandeis University, started working as an electrician in 1978 when, she says, affirmative action first opened construction jobs to women. President Jimmy Carter signed Executive Order 12067 in 1978 to develop uniform equal employment enforcement standards that applied throughout government. Seventeen federal agencies and departments were then responsible for enforcing non-

discrimination statutes and orders under the oversight of the Equal Employment Opportunity Commission (EEOC). “When Jimmy Carter issued the executive order, in the early days,” says Susan, “it had a lot of strong enforcement. The women who came in that period actually experienced affirmative action that was enforced and had that expectation. When it went from Carter to Regan, he kind of dealt with affirmative action like he did with OSHA. Things didn’t go off the books, but they stopped being enforced. They slashed the number of monitors. With nobody checking, that’s where the numbers really stalled.” Susan, one of the first women in the country to achieve journey-level status as a union electrician, has discovered that hers-magazine.com

Take a look at the 50-page preview (100 actual pages) of the March/April 2015 issue, celebrating Women’s History. In this issue, we highlight 20 female filmmakers, who together have earned more than $1 billion. We talk to women like Bernice of 'South Beach Tow' who work in male-dominated fields. Be inspired by personal tales from women who emerged from being "average" and lonely. We also examine some pivotal moments in pop culture and how it relates to your evolution. 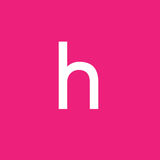