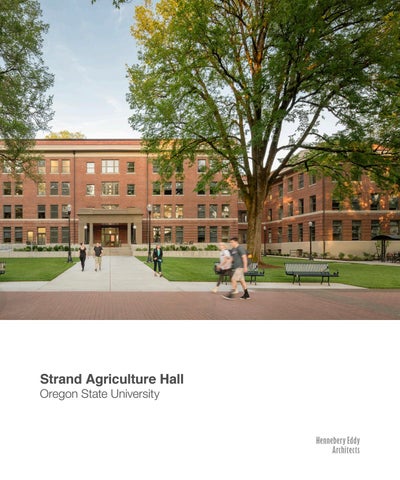 STRAND AGRICULTURE HALL REHABILITATION For one hundred years, Strand Agriculture Hall has served Oregon State University as its home for the College of Agricultural Science and the study of horticulture, agronomy, and agriculture. After decades of infill projects and poorly conceived modifications, the historic classroom building had become unwelcoming, dark, and outdated, with little appeal and a total lack of critical social spaces for students, faculty, and staff. Through careful rehabilitation inside and out, the 116,000-square-foot building was transformed into a 21st Century learning and socially interactive environment, while also retaining the original character and integrity of the historic design. Upon its completion, Strand Ag Hall, with all of its modern day improvements, remains, in essence, Strand Ag Hall.

PROJECT BACKGROUND Agriculture Hall, as it was originally named, was designed by architect John Bennes and constructed in three phases between 1909 and 1913. Extending between the East and West Quads, the building was the largest structure at Oregon Agricultural College when completed, and soon became the home for many important academic departments and laboratory spaces. The building’s three wings were identified as ‘Agronomy’ to the north, ‘Horticulture’ to the south, and ‘Agriculture’ at the center, which served as the central Administrative Building. In 1983 the building was renamed after August Strand, president of the university from 1942 to 1961.

CONTEXT Present day Strand Agriculture Hall is located within the Universityâ&amp;#x20AC;&amp;#x2122;s National Historic District, a designation shared by only a handful of campuses nationally and the only campus so represented in Oregon. At the heart of the campus, the building is sited between the two main quadrangles and is adjacent to Memorial Union and Valley Library.

Before photo of east elevation

A new entrance on the west elevation providing a high-profile entrance and heightened identity fronting the Memorial Quad.

ADA/Universal Accessibility at four existing entrances and throughout the building.

A full seismic upgrade of the unreinforced masonry (URM) structure, along with all new mechanical, electrical, and plumbing systems.

Establish a hierarchy of interior spaces.

Chalking, staining, and efflorescence of the brick facade

Spalling at brick surface throughout the facade

Narrow ramp to side door at buildingâ&amp;#x20AC;&amp;#x2122;s only accessible entrance

INTERIOR EXISTING CONDITIONS Strand had undergone a host of disjointed renovations, modifications, and retrofits over the years, which left the interior chopped up and disorganized.

Utility panels and boxes in public spaces and hallways

ACCESSIBLE ENTRANCES Like many early 20th Century buildings, Strand Ag Hall made no provisions for the physically disabled. This was most evident at the six main entrances â&amp;#x20AC;&amp;#x201C; none of which were accessible. As one of the primary goals for the project, OSU wanted to provide ADA/Universal Design entrances at the four cardinal points of the building. Integrating these with the historic architecture, and providing universal access in which the accessible route was also the most common path of travel, were central to the design.

ACCESSIBLE ENTRANCES At Strandâ&amp;#x20AC;&amp;#x2122;s north and south entrances, gently sloped sidewalks, not ramps, were designed to lead to the raised historic porches and serve as the most common path of travel for all visitors to the building. At Strandâ&amp;#x20AC;&amp;#x2122;s west entrance, a more pronounced accessible route was incorporated, with a new portico giving stronger presence to the buildingâ&amp;#x20AC;&amp;#x2122;s west elevation facing Memorial Union. A series of low-sloped ramps, stairs, terrace seating, planting beds, and conjoining pathways were explored. The selected concept combined these elements with a simple layout that is compatible with the historic character of the building and grounds.

WEST PORTICO DESIGN The conceptual starting point for the new West Portico was contained in the 1909 Olmsted Campus Plan Report to President Kerr, which outlined the intended evolution of the west side of Strand Agriculture Hall: “…Instead there should be a central door and an imposing porch on the west side of the middle mass of the new Agriculture Hall, so it would be a double fronted building, as its relation to the two quadrangles would demand.”

The goal for the West Portico design was to complete Olmsted’s intent for the west elevation to formally address the Memorial Union quadrangle with an entrance of appropriate scale and detailing, and to extend in a complementary fashion the building’s character and design features. Scale, proportion, location, and detailing of the existing porticos and entrance tower were studied to inform the new design.

SCALE &amp; PROPORTION The Golden Section, a mathematical theory developed by the Greeks, was used to establish the scale and proportions of the new portico. Considered the middle between two extremes, the Golden Section is a formula that, when applied to architectural design, results in a structure thought to contain inherent beauty, balance, and harmony.

DETAILS The portico’s detailing was derived from the materials and patterns surrounding the building’s original entrances. Simplified design details create a complementary interpretation of the building’s classical Doric Order, compatible with the context of the University’s Historic District and with the original design of Strand.

HEARTH: ACCESSIBILITY, ART &amp; SOCIAL SPACE Accessibility challenges were also present inside the building, with additional steps at the north, east, and south entrances. To address these issues, ADA-accessible ramps were combined with art gallery and social spaces to provide passage, interest, and the opportunity for social interaction for all building users.

The gallery aspect of each entry lounge was developed in close collaboration with the College of Agricultural Sciences’ “Art About Agriculture” program. The program, which encourages artists to investigate themes of agriculture and natural resources through their works of art, has a collection of more than 200 original pieces. The final design incorporated high quality reproductions – some enlarged as much as 12 times their original size – of several pieces from the collection. Each work of art was selected to illustrate the subject matter associated with each building wing. 1

IDENTITY &amp; INSPIRATION As an approach to wayfinding, each building wing was assigned a color palette inspired byits original title â&amp;#x20AC;&amp;#x201C; Agronomy (blue), Agriculture (green), and Horticulture (orange). Art, color, textures, and specific themes were explored for each of these subjects. Three distinct color schemes were derived from these studies and incorporated into the furniture and finishes at entrances, stairwells, and landings.

FLOOR PLANS The reorganization of the buildingâ&amp;#x20AC;&amp;#x2122;s floor plates was central to the rehabilitation, re-establishing the wide central hallways, large spaces, and consistently located door openings of the original design. The introduction of new spaces, services, structure, and systems was done with great care and respect for the buildingâ&amp;#x20AC;&amp;#x2122;s historic character. LEGEND 1

Construction was initially split into two phases, with Phase I including work in the basement and north wing while the rest of the building remained occupied. When surge space became available earlier than anticipated, occupants moved out and Phase II merged with Phase I. This resulted in greater efficiency of time and resources. Interior and exterior work was done simultaneously, with major efforts including a sub-grade electrical room, interior shotcrete installations, removal of the central brick vault, and the re-leveling of entire floors of the building.

WEST TERRACE &amp; PORTICO The rehabilitation of Strand Agriculture Hall – in particular, the complementary design of the west terrace and portico – has heightened its presence on campus and enhanced the OSU Historic District’s integrity.

WEST TERRACE &amp; PORTICO The new west terrace and portico replace the small, tacked-on entry porch and over-grown landscape, providing a strong visual and physical connection to the Memorial Quad. A combination of landscaping, benches, seat walls, integrated power, and ample space extend the useful area of the building to the exterior and provide comfortable opportunities for studying, gathering, and celebrating.

MATERIAL REUSE Old-growth Douglas fir joists were reclaimed from throughout the building where floors were removed as part of the renovation and redesign. The joists were salvaged, planed, and re-purposed as custom benches and tables for the buildingâ&amp;#x20AC;&amp;#x2122;s hallways and entry lounges. 1

MATERIALS &amp; FINISHES The materials and finishes selected for Strand were inspired by the original materials present in the building and its reputation as a simple, understated â&amp;#x20AC;&amp;#x153;work-horseâ&amp;#x20AC;? type building, void of elaborate finishes and ornament. Careful consideration was taken to ensure compatibility between old and new. 1

CLASSROOMS Strand Ag Hall has always been a classroom building and now provides 17% of the general classrooms on campus. As part of the rehabilitation, all of the classrooms were placed in the â&amp;#x20AC;&amp;#x153;bookendsâ&amp;#x20AC;? of the building on each floor, giving clarity to the building layout and making them easy to find.

INTERIOR DETAILS The historic character and wood trim details of the original interior spaces informed a new contemporary language for the interior building details. This contemporary set of details is employed at all new doors, windows, and hearth spaces. This design approach helps to differentiate new construction from the original building details, which follows the Secretary of the Interiorâ&amp;#x20AC;&amp;#x2122;s Standards for Rehabilitation. 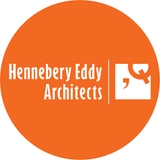